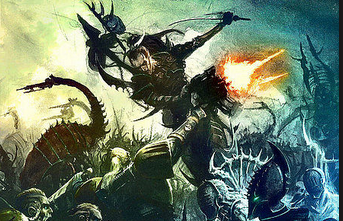 This week the Dark Eldar Voidraven is coming up for pre-orders, and its on the top of my "things to do" to figure out what my army's new bombers will be able to do. Earlier today we had a report from someone that read the White Dwarf and he was recalling what he had heard, now we have a more direct list of its weapons, thanks to a reader.


So thank you Inkub, your listing in the comment section made my day, and I am looking forward to getting down into the rules for this bomber.

via Inkub from the Faeit 212 comment section
Directly from WD, following weapons are mentioned in context of Voidravens:
Void lances
Dark scythes
void mine
darklight weapons
10 IG killed by void mine

Additionally:
Shatterfield missiles (cone-shaped ones)
Implosion missiles (barbed ones)
Void mine have option to be mounted lowered or stowed beneath the hull.


from earlier today.
via Archibald_TK
A few things I remember from reading the WD:
- The Voidraven carry a very massive bomb underbelly (biomechanical looking) that can be put on the model in a secure position or in an "about to be dropped" one.
- The rules for the bomb are probably different than before as it manages to wipe out a 10 men IG squad.
- The alternate weapons on the Voidraven are the DE variant of the Eldar Wraithguard ones. At first I thought it would be a blast version like the one on the Eldar plane but a single Voidraven managed to wipe out an unit of Scion (10 men if I'm not mistaken) so they may be templates instead.
- Multiple kind of missiles are mentioned, I think at least the Implosion one and the Cold/Heat one.
- Only 15 IG are still alive at the end of the battle report.
9/23/2014
Natfka
40k, 7th Edition, Dark Eldar, News Headlines, Rumors, Warhammer 40k