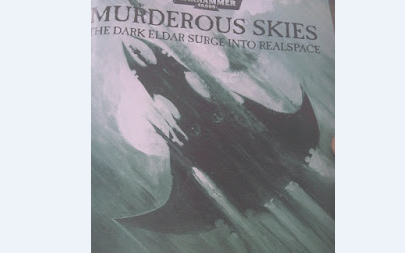 That's right, the Dark Eldar Voidraven is on the cover of the next White Dwarf. In fact "Fear the Voidraven Bomber" is the title. I was not expecting to get information on this one until the weekend, but whoa, very cool. Looks like my dark eldar are going to be getting a pair of these, simply on principal. Lets take a look at it from someone that has seen pictures of it!


Please remember that although these are indeed coming, they are still considered rumors until we see official information.


via an anonymous source of Faeit 212 *****
Next weeks white dwarf #35 shows the DE Void Raven.
Here is what the new cover says.

Its has most of the aesthetics of the Razorwing Fighter, but larger with 4 Engines, 3 tail fins, and two Void Lances that protruding from the wings. In the main body, the pilot sits on a set of small bat-like wings with a long nose along the front. Its a gorgeous model, and if you like the razorwing fighter, the Voidraven looks very similar, just bigger and longer. Where the razorwing nose is open, there is a canopy for a nose pilot in the voidraven.