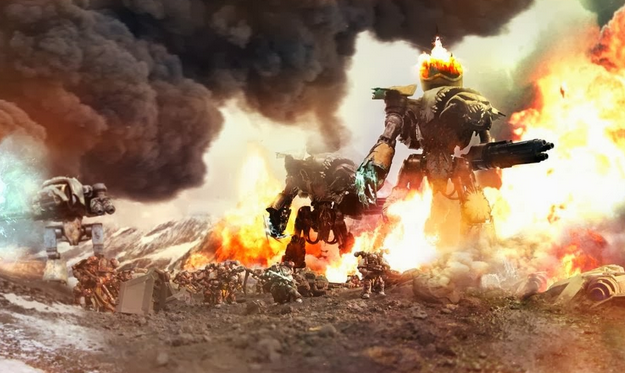 D-Weapons only destroying invul saves on a 6 is huge, and will really help a lot of people accept Lords or War, and Vehicles are going to be back in force. We know that you can only explode a vehicle on a 7+ now, and I assume that means you can still wreck one on a 6. Very cool as even with hull points this will balance out vehicles a little more.


Check out the latest. and please remember that all of this is from the latest White Dwarf, and should still be considered rumors.

Leaked Pic
http://www.dakkadakka.com/dakkaforum/posts/list/4920/592379.page#6824677
Rules changes from 6th:
Swooping FMCS only take grounding tests once per phase, at the end, and only if they take a wound.
Wounds spill over from challenges.
D weapons allow invulnerable saves unless you roll a "6".

via xttz on Dakka from /tg/
Some stuff from /tg/ that mostly lines up with other rumours / WD snippets:
Word on the D Weapons is 1: miss, 2-5: wound with no armor save but cover/invuln still allowed, 6: destroyed.

The specifics for contesting is that all units now score, but troops in forged armies now have the uncontestable rule (like for the gargs in the formation), unless the other unit also has that rule. So it isn't just a big deal for forged v unbound, but makes troops a big deal in standard foc games.

The rulebook also specifically states requiring player permission for unbound games. Oh, and as a bonus, forged armies get to reroll their warlord trait if desired.

Unsure of the rest of the damage chart changes, but explodes only happens on a 7+ now.

You can ally with "come the apoc" now. Penalties include not being allowed within 12 in and not being able to deploy together

FMC now only have to make one grounding test a shooting phase, and only if wounded. No more laser pointer crashes. Big buff for flying circus.