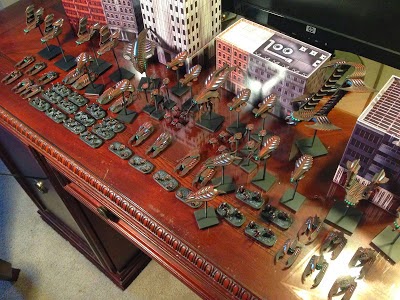 I have been playing my Scourge now for quite some time in Dropzone Commander games, and many of you have even seen the battle reports with Shawn or even against David that have been up. I have talked about specific units but this morning I wanted to talk about a variety of things that should be considered when playing the Scourge in Dropzone.

Playing Aggressive
Ultra aggressive. That is the best way I feel that scourge should be played. Taking your forces and just hitting fast is important. You can overstretch sometimes, so there is a balance to this that must be taken into consideration. After all, units like your Desolator and your Annihilators are not going to get there fast. Send that Desolator straight up the middle (activating this battlegroup last) after anti air opposing units have committed. Get her into the battle and do not fear losing her. The Annihilator should be following up alongside, and pulling just short for a solid placement for indirect fire shots with that large template.

There are two units that over and over I have seen turn the tide of a game. The Desolator and the Annihilator. Both are scary enough that your opponent had best be taking heed of their movements, and spread out enough to avoid taking deadly barrages.

Dropships for Everyone
The next important thing I wanted to talk about is dropships. Do not drive your vehicles onto the board, unless you are doing so with AA tanks to protect something crazy. Driving on the board may feel like you are gaining some valuable points in your list, but in the long run, since you only drive on at half your movement value, you are losing at least half a round or more.

I like to drive my dropships directly into the center of the board for a 2nd round deployment, and possibly some AA deploying in round 1. You need to get the most out of your forward movement playing scourge, and running in off the table edge is just not going to work. I have tried this now many times to save on points, and even though I do win some games doing it, its just not an effective way to get your scourge where you need them.

Razorworms and Heavy Tanks
Next, I want to talk about how to use your heavy tanks with razorworms in them. The first thoughts I generally have with these tanks is to play them like tanks. This has led to a largely hit and miss usage of razorworms.

After many games of them doing absolutely nothing, I have resorted to treating the heavy tanks as transports. I fly them in at full speed, placed behind a building so that I have options on where I am going to instantly insert my razor worms. After that round, the tanks will be active to do their thing. I think this is important, as it gets your heavies up into the action, especially the tormentors (the flame tank), but also because it for certain makes sure those points used for Razorworms are not going to waste. ]

Once you do make an insertion like this, the rest of your hunters and other fast moving tanks should be pushing the envelope enough that your heavy tanks have a good chance of continuing the fight.

Thats it for now, and dont forget your Minders and Prowlers. Used properly, your opponent must direct gunfire their way, and thus allowing for you to really push your forward momentum.
5/27/2014
Natfka
Dropzone Commander, News Headlines