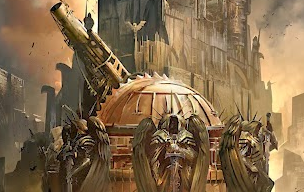 Its time to paint up my Aquila Strongpoint Macro Cannon. This will be a lot of fun to get ready for games with it being a part of the standard Core Detachments for Battle Forged Armies.

Please remember that until we have an official release to verify rules, all of these must be considered rumors.

Here is a link to see two of these with some more leaked images.
http://descansodelescriba.blogspot.com/2014/05/swanland-dibujando-orkozruinas-con.html


Force: Warp Charge 1
The Psyker channels his powers through the psi-circuitry of his force weapon, transforming it from a mere physical weapon into one that can rend reality.
Force is a blessing psychic power that targets the Psyker and his unit.
All of the target’s weapons that have the Force special rule gain the Instant Death special rule until the start of your next Pschic phase.

Lords of War and Fortifications -escalation- are now a part of a Battle Forged Core Detachments. A core detachment are each of the non-allied detachments that you bring for your army. You can take as many as you like, and I have seen no restrictions no the number of allied detachments either.
5/22/2014
Natfka
40k, 7th Edition, News Headlines, Rumors, Warhammer 40k