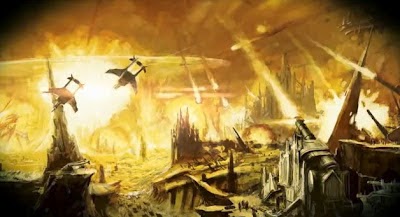 There is a lot here including that the Dark Vengeance re-release with new rulebook will not be temporary, and that there is a new damage chart for vehicles that matches up with what we have in 6th for buildings (a 7+ to instant destroy). A lot of changes are listed here, the flood gates are open, and I am out collecting information as quickly as I can.


Please remember that these are still rumors, and there is a lot more to come.

via a reader here on Faeit 212
I had a look at the white dwarf and have read that in order to make vehicles more survivable the chart is to be made similar to building, with only a roll of a 7 being an insta-kill. I also read about deny the witch, it appears that you have one dice as standard, on a roll of a 6 it cancels out one successful roll of the psyker but doesnt necessarily cancel the attack outright. If you have a psyker you can choose to add more dice to try and stop them, with it increasing it from a 6+ but it didnt clarify how.

via an anonymous source on Faeit 212
Battle Brother Independent Characters can join an allied unit in that unit's transport.

via testrisphreak over on Dakka and collated by Zion over on Talk Wargaming
testrisphreak over on Dakka for taking all these pictures of the White Dwarf and giving us even more information from it's pages:
Difficult terrain is -2" to charge range.
7+ to explode a vehicle.
New wound allocation - weapon by weapon.
Munitorum edition - $340, 2,000 copies, online only, limited
No dice, objectives, or templates. Those will probably drop next week.
"Units now shoot based on the weapon they're holding. E.g., the flamer shoots and resolves all wounds, then the bolters in the unit shoot and resolve all wounds. So on and so forth until all eligible weapons have been fired. No more 'my bolter has 24" range so my flamer wounds can apply to models up to 24" away." This is huge."
Melee to-hit chart is the same.
S vs T to-wound chart is the same.
BS6+ not listed in the shooting to hit table.
Vehicle damage table has effects for 1-3, 4, 5, 6, and 7. (Cannot read text)
Perils chart is a d6 table.