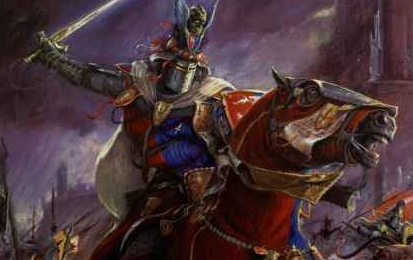 Bretonnians have been in the rumors of late, and even with all the buzz of the new edition of 40k going on right now, I wanted to take a look at what is being rumored. A new image has appeared over the internet, and while I honestly know very little about it, I am posting a quick link to it where it was posted up, over on 40k Warzone. So lets take a look what is rumored for the Knights of Bretonnia.

via  Tom Harper over on 40k Warzone
Follow the link to see the image.
http://40kwarzone.blogspot.com/2014/05/new-bretonnia-rumours.html
The first new rumour is that Grail Knights can also be fielded on foot - we have just been sent a photo that could possibly be from a new Grail Knight kit!

Of course we have had lots of rumor here on Faeit 212 as well, and here is a recap.
A little bird behinds the scenes has revealed to someone I know that
apparently Bretonnians are in July and will be getting a new book along
with...
Plastic duel kit questing/grail knights
Plastic knights of the realm/questing knights on foot. Have maces or swords
plus shields.
special rule for knights armed with maces confers a +1S
two clam packs with characters.
Tom Harper