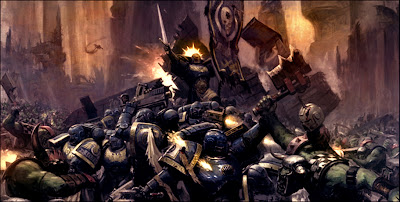 We had tons of rumors for 6th edition come through, and for awhile, I was posting as fast as I could type. I have had a week or so now to relax, and wanted to take a look at what we had in our 6th edition rumor compilation at the top of the page.

These are the rumors I had posted up that I had found to be the most credible regarding the rules of 6th edition, based on my own sources and conversations. I am going to repost the whole compilation here at the bottom, but I will do a quick overall of the sources for 6th edition information.........

Tastytaste
His rumor set was very much on money. His records have been very accurate in the past, with the Dark Eldar codex, Necrons and Grey Knights. 6th edition was no different from the Blood of Kittens. I have not read the fluff yet in the new rulebook, (I am working on it), so cannot comment on the accuracy there.

Grant
Although there was a lot of grumbling about Grant and how he came out of nowhere to produce rumors..... He was right on the dot when it came to posting what he knew. Looking at the information we received from Grant, most of it came from the Chaos Codex, which is exciting still, because we still have these rumors to look forward to. Take a look above at the top of the page for the rumor compilations for the Chaos Space Marines codex.

Grant.... we look forward to hearing more on Faeit 212. Also a huge thanks from myself and I am sure from everyone here for your exclusive looks ahead.

Bigred
Also very accurate. Bigreds rumors below were also very much on the money. He gave us some details about psychic powers and how they were determined and to be used. Everyone early on had the release dates off, but a week early is not considered to be wrong in terms of rumors.

Beasts of War
Another accurate set, although with a few bits that were slightly off or incorrect.They were on the money regarding the AP values of close combat weapons, wound allocation and more. I think the only places where BoW had any variances was with terrain being set on fire, and drop shipped terrain (so far, could still happen), and bunkers(where are the bunkers?). They were very accurate though overall.

Here is the compilation in its entirety. It will remain on the top page for a couple more days, and then it will be time to remove it to make space for new page additions.

via Tastytaste at Bok
That leaked 6th edition pdf was and is still a complete fabrication.
40k 6th edition is going to be much closer to Fantasy 8th and 40k 2nd edition than anything else.

GW still has rumor lock down in place, so these leaks are for the most part things that have been seen before from previous editions of Games Workshop games. This is to protect sources from the long arm of GW.

Let us start with 6th edition fluff progression.
The Imperium is fracturing and the Space Marines are starting to separate themselves from the Lords of Terra. The heretical and xenophobia has gotten to a tipping point causing many chapters to take actions against the “best wishes” of many in the Imperium.

A discovery of galactic importance has happened.

At a time before right before the Horus Heresy the Emperor had intrusted Roboute Guilliman in the protection of one Xenos race that was completely immune the temptations of Chaos and would prove the ultimate key to the destruction of Chaos. The Horus Heresy ended such plans. Fast forward today with discovery of these lost correspondences, it is believed by the Ultramarines and others that the Tau are that lost race. So now instead of being charge with their destruction the Astartes are the Tau protectors.

Rules changes
•Every unit gets a 6+ save vs. all Psychic Powers.
•Random Charge Lengths are in
•Pre-measuring is in.
•Random Battle field effects are in.
•All armies can purchase buildings for placement on the battlefield.
•Psychic powers are selected during deployment. (except Grey Knights)
•Deployment and Missions types have doubled.

ALLIES ARE BACK IN
That is right allies are back in and this will be according to fluff and will have certain restrictions. So for instance Tyranids will not have any allies. Tau with all Space Marine Chapters. Necrons with Blood Angels. Imperial Guard with Space Marines. Chaos Space Marines with Demons. If it fits the fluff it will be done.


via Grant at Faeit 212
As far as 6th ed...
I will also add that vehicles use "hull points" in 6th. If a vehicle has 3 hull points it will die after 3 shaken results, but it can still explode after 1 shot as normal.

All cc weapons have AP values in 6th similar to what was in the fake 6th ed rule book leak.
There are going to be no different levels of Eternal Warrior either.

I know all of these rumors sound ridiculous but they may not be bad for the game at all. I have been chatting with the source for my documents, we both feel that based off of the csm codex that assaults off of consolidation will be back as well as possibly off the bloody deep strike. This is not only backed up by the fact that they are "nerfing" assault range, but also because of 2 special rules.

say hello to "snap fire" and the return of overwatch.
Snap fire - allows a unit to shoot at an attacking unit at bs 1 prior to being assaulted.

Rhino's have 3 hull points, Landraiders and the defiler have 4. Any damage chart result other than wrecked or explodes will take 1 hull point away.
HQ's can now challenge each other just like in fantasy. This must be accepted by opponent or is played normal. HQ that wins, wins the assault for his unit.
"Mysterious Terrain", basically you don't know if the stuff is difficult or dangerous until you roll a d6 upon entering it
Vehicles have assigned hull points (There is no formula)
Some usr names in the codex are "strike down", "blind", and "un-weilding". Not sure what they do.
There is a usr called "invisibility" that seems to have an affect on targeting a the unit and also effects assault.

via Bigred at Bols
Psychic Powers
-There will be at least 4+ "Disciplines" of Psychic Powers in the game. (WFB has 8 lores)
-Disciplines seem to fall roughly along the lines of the sects described in the novel "A Thousand Sons" as used by the Heresy-Era chapter.
-Each Discipline will have a "Default" power and a set of others that you will roll for each game.
-Number of rolls you get and the the exact details of which powers you end up with are said to be similar to WFB 8th's power selection mechanic.
-Powers have a "Casting Cost" that is different from the mechanic used in WFB 8th.
-Certain 6th Codices will add additional racial specific Disciplines.

Latest word from the schedule - logistics side of things regarding 6th edition...
-Rulebooks are said to have arrived and are in warehouses now worldwide.
-Retailers will receive their merchandise on July 5th, with a public streetdate of Saturday July 7th.

The only question is exactly what date the price codes and pre-orders go up, but it will sometime in the second half of June. If Games Workshop sticks with their standard "10 day notice" , it would place the 6th Edition advanced orders on June 27th.

via Faeit 212 Not a rumor, but from "A Thousand Sons" novel
Corvidae - Precogs: Ahriman was the head Corvidae.
Pyrae - Pyromancers
Pavoni - biomancers: Healers and Fleshchangers
Athanaeans - Telepathy
Raptora - Telekinesis Were able to create Kine Shields for protection

via Beasts of war
Wound Allocation
During shooting, wounds must be allocated to the models that are closest to the unit shooting at them. No longer will you be able to allocate wounds to the rear of the unit.

Close Combat Challenges
independent characters and other characters (not sergeants or other unit upgrades) will be able to issue a challenge in close combat to another similar character.

if you accept you go into base to base and resolve the challenge and that determines the results of the assault.

If you choose not to accept the challenge, you fall to the back of the close combat out of base to base and let your unit do the fighting for you, resolve combat normally.

Psychic Powers
Psychic Powers are random.
Simple dice roll determines which powers you will get out of your codex

Missions
From the Beasts of War, we have it that the random game length is a thing of the past for almost all missions
Possible mission generator similiar to leaked ruleset.

Terrain
Buy terrain with points to add to your lists. Bunkers etc.
Terrain, you just are not sure what will be there until you enter.
Possibilities of something like Drop-Shipped Terrain.
Terrain on Fire- You will be able to use flamers to literally set terrain on fire and it will last a random number of turns.