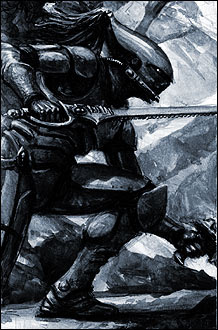 While Eldar are rumored to be at some point mid to late next year, we have some very precise rumors on exactly what models would be released for them. I do like seeing this, and there are some very new things here that I have not seen or heard of before. So check these out.....

Please remember that these are rumors, and to take with a little bit of salt.

via Kirby from 3++   (check out his new forums here 3++ Forums)
Been informed there are some Eldar boxes floating around warehouses. How long they get sat on before a codex is released though, who knows. I'm going to guess around a year off. We know CSM are next and then Dark Angels with the Hobbit crashing into scenes December, that could push DA back to early 2013. So mid 2013 is the likely bet for Eldar is something doesn't shove them out of the way.

Here's what I've been told re: boxes. No rules.

plastic Warpspiders/Everguard
plastic Skycharriots/Shining Spears
plastic Phantomwaechter - these might be the shadow spectres?
plastic Jetbikes
plastic Wraithguard/Cataphracts
plastic flyer combi-kit - The flyer is pretty large and has a crossbow shape, two canopies, one fin. The main variant on the cover has some lances and a large dorsal distort cannon. The other variant has extra downward/sideway thrusters, but I don’t remember if it has a different weapon loadout.
plastic phoenix lord niadhau - For Shining Spears, appears to be on a Vyper jetbike.
plastic webway gate
resin box Avatar
resin Black Warden - The Black Warden looks like an female Autarch. She has a shurikencatapult and a feathered guardian helm with an eye on it.
resin Dire Avenger Xentarch - Appears to be a new English name for Exarch?
resin Howling Banshee Xentarch
resin Fire Dragon Xentarch
resin Striking Scorpion Xentarch
resin box Dragon Riders
resin box Eldritch Raiders - They look like guardians but have no helms and wear scarfs around the lower head and swashbuckle belts. They are very individually equipped, have all sorts blades, pistols and/or rifles. (potentially Storm Guardians?)
resin box Halcones Cazadores
resin Warlock
7/18/2012
Natfka
40k, 6th Edition, Eldar, Rumors, Warhammer 40k