CSMs Not In the New White Dwarf! 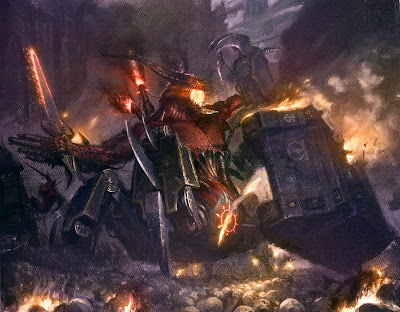 So rumors are coming in that Chaos Space Marines are not going to be released in August. In reality they are saying that the Chaos Space Marines codex is not featured in the White Dwarf, which essentially is the same thing. If this is the case, and these rumors are panning out to be true, are we looking at September release like Neil was predicting? or are we going to have to be waiting for October.

here is the latest in the rumor mill. Please take with a grain of salt.

via Erazmus_M_Wattle on Warseer
I can confirm for you all that codex Chaos Space Marines will be released in October at the earliest.


The White Dwarf features Daemons. Lots of them but no Chaos Marines. The month after is the 40k starter box so that means no codex until October. I'm a bit bummed out by this but I suppose it gives me longer to save up.


However the boxed game sounds like it's going to be pretty sweet so perhaps I won't actually have any money left.


via Rixitotal on reddit
So in next months white dwarf there is going to be a leaflet with updates for Codex daemons and daemons in fantasy.

Some changes to old units, flamers are now only S4 in fantasy and some units have had point changes. ect.
Also new units slannesh massive chariot (2D6 +1 impact hits) and other weird chariot thing in 1 kit. the other thing looks and acts kind of like a mobile meat lawnmower. this is in both games and acts like a chariot in 40K.
also soul grinders are coming to fantasy! has T7 6 wounds and a load of upgrades for its shooting. looks pretty mental. the model (40K kit) in the white dwarf and leaflet was on the same base as the giant goblin spider.
also new models for plague bearers (really really nice, some have fly heads) screamers (look similar but with lots of eyes), flamers (similar) and nurgalings (looks like a pile of funny little germ monsters you might get in a dish washer advert).
Also new beastman shaman.
should be out next week :).
7/22/2012
Natfka
40k, 6th Edition, Chaos Daemons, Chaos Space Marines, Rumors, Warhammer 40k, White Dwarf