Introducing the Tau Lamprey.... No Kroot for Tau 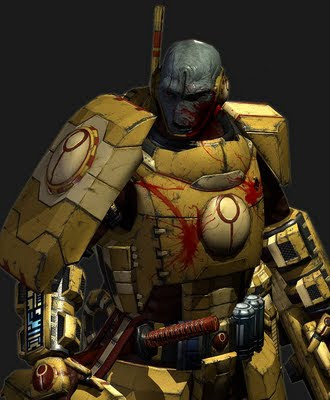 We take a break from our recently normal Chaos Marine/ Daemon rumors and news to bring you something many of you are dying to discuss and hear the slightest bit of information on....... Tau.

Apparently the name of this Vehicle is not set in stone at the time of the rumor, so please remember that things change, these are rumors. The same goes for the No Kroot. A huge thanks goes out to Logan, who is kind enough to discuss his rumors here on Faeit 212. As normal I protect sources vehemently, so discuss away without bashing the source.


Via Logan on Faeit 212
Tau
flyer wave could Voidraiven, Tau Lamprey, maybe another.


The name Lamprey is by no means official. Its entirely possible that will not be its name. Also possible it wont be released till codex.


As for the "Lamprey" i am not sure yet. But the assault crisis suits have experimental rules where once per game they gain BOTH benefits of moving with their jump things(unnamed at the moment) which lets them move 12in. Then reroll assault distance if desired. If the first attempted charge is successful you gain Furious Charge.


This is ALL experimental though.


new characters to the Assault Crisis Suits....and i have even heard the rumor NO MORE KROOT!


I cant tell if the NO KROOT! rumor is true but it makes sense. I am lets say VERY involved with the play testing process of the codex and I have seen no kroot units. Shhhhhhhh don't panic.
Talking to guy who is higher up than me in an email here is what he said


" Now Logan, I have received your emails regarding your next project. You asked why there has been a lack of a certain unit(Kroot) all I can tell is that right now it is being heatedly discussed whether to keep them in our upcoming release. We want this book to reflect the primary army, not necessarily other "mercenary" forces. When we sort it out we promise to let you have a peak.


Thank you for your concerns and comments regarding this matter."


Logan comments here regularly, so by all means join the conversation below as that is where most of these rumors have come from. The comment section. Thanks again Logan for sharing any insights.
7/25/2012
Natfka
40k, 6th Edition, Rumors, Tau, Warhammer 40k