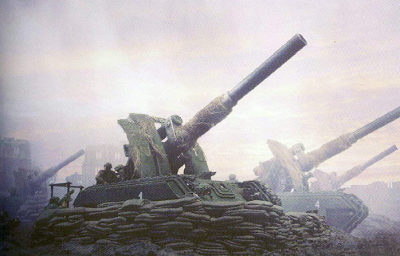 There are some major differences in the way Barrage Weapons work in regards to the Ordinance Batteries of the Imperial Guard. It would be wise to know these changes, before either facing them, or attempting to use them to their fullest on the tabletop.


Lets talk rules changes and lets start with the Basilisk as our standard weapon.
First off, in 5th edition a basilisk was able to fire directly or as a barrage. If fired directly, they were treated as any other normal ordnance weapon and ignored the minimum range. However if they fired barrage, they had a minimum range (you could not measure before you fire) and well, the maximum range you never really have to worry about. They also caused pinning at a -1 leadership.

Now in 6th edition, the good old Basilisk has become much more potent. Lets look at some of the what has changed.

1. No direct firing capability. Unless I am missing something, a barrage weapon must now fire a barrage (no direct firing). Firing an ordinance barrage weapon does not mean the vehicle must remain stationary like in 5th. Instead you can move your 6", rotate, and fire. Any other weapons on the tank that you are wanting to fire must snapfire. This effectively removes the need to really ever fire directly, especially with point #2

2. Barrage Weapons can fire Indirectly. This is different in 6th edition, as any shot that either does not have line of sight, and or is within your minimum range (within 36" for a basilisk) is considered to be indirect fire. So minimum ranges now mean much less than they did in 5th edition.

3. Wound allocation. Wound allocation is always from the center of the blast marker. This is for both determining cover saves and wound allocation. So if you are firing your basilisk at your target, and you hit... start allocating wounds from the center of the blast. In the case of a multiple shot barrage, each shot is resolved separately. This means its very possible to do what is being called Barrage Sniping. Meaning that if you target the models you want to destroy, and you hit them under the hole, they are essentially going to die first. (Sniping characters, heavy weapons, etc is extremely powerful). 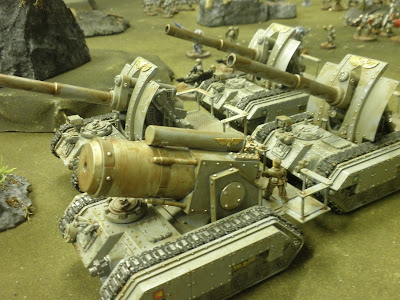 4. Psychic Powers. This is where it gets interesting. Imperial Guard have several different armies that are considered to be battle brothers, Blood Angels being my current favorite (Dark angels might end up beating this). With these battle brothers, these armies are able to take the divination discipline. This is very powerful when it comes to ordnance batteries, since the primaris power for the discipline allows a friendly unit within 12" to re-roll all failed to hit rolls. So yes, you can re-roll your scatter dice, with an excellent chance to hit.


5. Blast Markers have changed. This one everyone should already know. The entire marker is at full strength now, instead of only the center of the marker like it was in 5th. This allows you do damage quite a bit of units all at once. Granted the downside is you are AP3, so you need a 6 on the damage chart to destroy the tank.

6. Some tanks that I think we should start seeing more of..... The colossus.
This tank should be like gold in this addition. More and more we are seeing a lot of infantry on the field. There are still tanks, but the colossus with its S6 AP3 barrage that ignores cover should start seeing more life on the tabletop. The picture above has my converted Colossus on it. I have one more complete, just not painted. Apparently I need one more.

7. Cover..... A lot less cover is needed now. 25% of the facing only, which is easy to get. Not only that, but now that we can purchase fortifications, 3+ cover saves for ordnance batteries that do not need line of sight to fire is a great thing. Not to mention, that if you have the points, camo netting is also looking good for parking behind that fortification.

8. Nightfighting. This needs to be mentioned. The new nightfighting rules do not allow for any target to be chosen outside of 36". This is important, because you cannot even fire these shots indirectly. They can scatter outside of 36", but you cannot choose your target outside of that distance. Bring along some chimeras with searchlights to help bypass this problem.
7/23/2012
Natfka
40k, 6th Edition, Imperial Guard, Warhammer 40k