Exclusive Report: The Other Half 40k Design Studio Open Day. 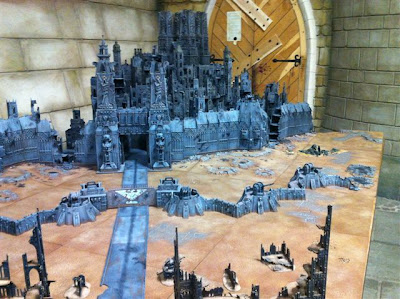 When Scissorheart and his brother went to the ticketed event, 40k Design Studio Open Day, there was a third friend that met up with them, Zak. He went to other sessions during the day, and was able to compile a list of things that were not discussed in Scissorhearts report.

via Zak
Hi all,
I met up with Scissorheart and his brother on the day (and sensibly didn’t use my sat nav to get there, thus avoiding the roadworks ;-), and I went to some of the sessions he didn’t. I also spoke to Jez Goodwin for a bit and some of the CAD designers and sculptors.

This open day was really a mini games day, although they only had a couple of small tables set out with figures – and these were more for the dev team to explain rules queries with.

It was also clear from early on that there were to be no ‘reveals’ – no one would say what they were working on currently, or what was about to be released and all displays / portfolios were of ‘old’ or current stuff.


There were the following areas:
‘build a bike’ challenge – they had loads of sprues and you had some time to build your own mashed up bike.

Large game of fliers – which you could drop in and out of if you wanted to. There were some brilliant ork conversions – biplanes, double bodied hulls and ‘hotrod’ styles. I took some pics but they aren’t brilliant, will see if I can upload them somewhere and link to them….

Artists area – some portfolios of art were out, and John Blanches were incredible to see in the flesh – amazing details and such vivid colours that just don’t quite come across to the books.

The Eagles Gate board from the rulebook page 390 was on display – it is huge 4 x 6 of the 2’x2’ gameboard sections and awe insipiring.

Chad had an area where he was painting a board and had some necron scenery unpainted so you could see how it was made (mostly cut mdf and then card / plastic layers and some plastic balls cut in half).

Designers / sculptors – happy to chat about how to sculpt in greenstuff, fimo and sculpey, with lots of 3up and original greens in display cabinets.

‘Publications’ had an area with a ‘where’s wally’ type thing of can you spot the 10 blood angels hidden in the Eagles Gate photograph and can you name 4 marine chapters from their livery. I think the prize for the spot the marine was a storm talon.

Display cabinets – which mostly featured the armies from this months white dwarf. Nice to see them in the flesh……

OK, onto things I can remember (bit random this):

Plastic figures seems to be the favoured product from the designers (as you can then have kit bashing etc) and often more items on the sprue. However, the limitations of plastic were due to them using steel moulds, so you could have no undercut on the figures – so it took a lot of careful checking and re-mastering to ensure that they were practical. Also the very fine detail often couldn’t be achieved.

Finecast and metal had the advantage that they could have undercut as they used rubber moulds which could be prized off with some flexibility, and greater fine details due to the properties of the material / mould.


Went to a seminar by Matt Holland on sculpting – this was great to basically sit and watch a sculptor spend an hour making an orc arm whilst he chatted and answered questions. Matt had already put an wire armature arm in place with a thing layer of greenstuff covering it in preparation, but he then proceeded to build up the arm by placing blobs of greenstuff of approximately the right size and shape to mimic the arms musculature and then smoothed them together, sharpened the shape and then built in details (veins / tendons).

Its difficult to pass on some of the pointers (as he was doing them at the time) but things he mentioned:

You can put it in the freezer to slow hardening time if you need to do something else, but when you take it off, it gets covered in condensation.

He recommended ‘wet and dry’ paper to sand it down if required.


I talked to Jez Goodwin for a while. It was great to see someone who still has an amazing passion for designing. Eldar are still his favourite by far, and he wont let anyone else touch them if he can (although he did say he worked with Juan (sp?) on the dark eldar and at times you couldn’t tell who had sculpted it). He did mention that the second iteration (we’re currently on the third) of the CW Eldar Aspect warriors were not done by him, and that is why they had raised designs on their armour, where as he is adamant that they should always be smooth…

I asked him if he revisited CW Eldar would he change the design (in the way Dark Eldar were) and he said categorically no. He liked their style and look and didn’t see the need to change it. The only thing he said he’d really like to do is change the turret design (but not the body) of the falcon – maybe go for a slightly narrower fire prism design with a main gun and a slightly to the side / underslung coaxial gun…

He said he really liked the forgeworld stuff, which he’d helped with.

It wasn’t a direct comment on eldar aspects but he did talk about the move towards not just troops but also elites in armies getting plastic kits.

In terms of Dark Eldar, he said he would have liked more plastic kits for some of the things such as grotesques, but they didn’t have the time.

And his favourite dark eldar figure to sculpt?…. the Clawed fiend.

He had some dark eldar concept sketches which were really nice and I asked him about the possibilities of a book of them. He said he would love to. He had enough to do just an Eldar / Dark Eldar book, but that was down to Black Library and so he had no sway in that…

Jez was a genuine delight to talk to and probably my highlight of the day.

I went to a demo on how to paint space marines / use shades – but this was very very basic which was a bit disappointing for me as I was hoping for something other than ‘how to paint a quick tabletop standard fig’.

Dark Eldar
Lastly I went to the ‘Developing Dark Eldar’ which was Phil Kelly and Jez talking about how they designed the Dark Eldar.

They talked about all sorts of things – many of which were in the videos that GW put up on their website when they were released, but they also talked about how they went about things and what were pet likes etc…

Jez liked them as they were space pirate ninjas on bikes… but he didn’t want to just do ‘spikey eldar’ so they share a common design ethic, but with hints as to what came before the Fall.

Phil said that DE were the aggressive super fast pirates making snatch and grab raids out of necessity that could end in real death, so rules wise (and fluff) he had made them strong on the attack, but weaker on the defence to give them a different feel to other armies. A fast, vicious glasshammer…..

He also mentioned that they survived due to no psychics, and that you should think of them as the martial side of the old eldar and CW eldar as the psychic side, so the original pre-Fall eldar were the combination of both and better (in that ‘greater than the sum of the parts’ way).

Thye mentioned that they hadn’t had time to do everything figure wise they wanted. They would love to do true and blood bride kits – which may in time come about (but don’t look to anywhere in the near future) if they get the chance. They did mention that the void raven frames were done though.

Not all special characters have been done, or even are planned to do at the moment. This is partly so in the future they can do a clampack release of one of the special characters just so Dark Eldar players don’t feel left out /abandoned (this seemed to be the intention with all armies in a way).

There were still ideas that never got included and may see the light of day (again in the mystical ‘someday’).

Jez would love to see a 2 storey ‘galleon’ raider with lots of sails and bikes carried on the back – but he said often frame size / number of frames to a kit was a major constraint – so this was very very unlikely to happen.

Phil talked about DE not really having anything big (tanks and monstrous creatures) which fits into their fluff, but he personally liked the idea of some sort of huge creation – and was thinking of modelling a skaven hellpit abomination with wrack heads and masks and that sort of thing….


New Army Types?
I asked them if they though there was a ‘missing play style’ of army in 40K. They felt that with 16 armies, no there wasn’t – a slower more shooty than imperial guard was the only thing they could think of, which they thought would be boring to play / play against.

It was as close to a categorical ‘no new armies’ as I think you could get.

They also mentioned that it was getting harder to keep the feel of each army and not do a unit which was just another armies unit with a slight twist to it… but they vaguely mentioned that with the allies rule in 6th, there might be a chance to do odd units. I mentioned the old mercenary units / dogs of at from Fantasy and they said possibly that sort of thing… but it didn’t sound like anything that was even being looked at currently.

Dark Eldar was a 5 year project before it came to fruition (mostly Jez said due to having to keep pushing for the project as DE were such a poor selling army – which has now got a massive boost and a similar thing has now happened for Necrons – so this has opened the door to other stuff which might not have been considered in the past by marketing / sales).

Also talking to some of the CAD designers – they said that most sprues, from idea sketches to final production usually took 18 months – so you can see the sort of lead times they have.

Overall a fantastic day – and apologies for the rambling…..

From the Fang also posted up his report from 40k Design Studio Open Day. Here is a link to check out incase you missed in the BlogExchange list.
http://fromthefang.blogspot.com/2012/07/gw-design-studio-open-day.html
7/17/2012
Natfka
40k, 6th Edition, News Headlines, Warhammer 40k