Behind the Scenes Conversations: Pot Holes and White Dwarf 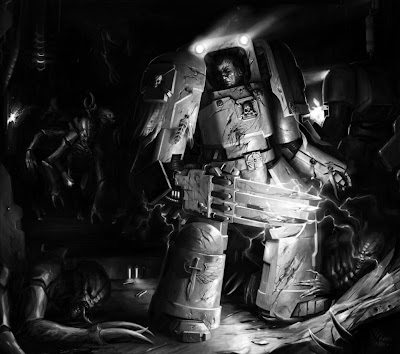 There is often a lot of conversations that go on behind the scenes here at Faeit 212, and while most of them will not see the light of day, I was given permission to post up on two recent conversations. This is the first.

To catch up, we were discussing the role of White Dwarf, pot holes, and codex updates.
pot holes; a term meaning "a unit left out of a codex when it is released"


Please understand, If any parts of this seem missing or feel like things were removed or moved around, its because they were. This is the part of the conversation that I was given permission to share here on the site. The parts that are here, were left as is, and not edited.


Look for the second conversation to be released later today!


Behind the Scenes Conversation (the not me part, and must remain anonymous source)
You can expect to see a lot more rules updates in White Dwarf in the future.  A focus of 6th edition isn't just to be cinematic, but also to make sure that armies stay relevant and current even as their codex ages.


This means not only point cost or stat changes to existing units, but also entirely new units and models being released after a codex has been printed.


A lot of good ideas in the past have sat waiting for the next edition to come out.  This new method will allow inter-edition changes, either to address concerns a specific army may have as the edition matures or even just because it's awesome and shouldn't have to wait 4-5 years to become part of the game.


We're seeing a new era for White Dwarf that is more than just a glorified catalogue of upcoming releases.  Expect good things.


------------------------
On Wed, Jul 25, 2012 at 11:30 AM, Natfka wrote
Another thing I was thinking about regarding this. It also helps GW with not having to leave units without models for extended periods of time (the chapterhouse debacle thing). Instead they would just leave that pot-hole there, and fill it when they can get the model into production.

This could also very much lead to even higher quality models, as designers would not have to rush a model at the last minute to make a codex deadline (and then have the design, if it missed the deadline, sit out for years). This will also help keep codices up to date, and for the obsessive hobbyists like myself and many that I know, it will help armies stay valid, and instead of the huge gaps between codex releases we would be seeing updates.

So I see a huge positive in this model, even if they intentionally leave something out because the model will not be ready. (personally it only hampers my modelling somewhat, I love to convert, i just wish i had more time for it).

I had started a post loosely on this topic over the weekend when I heard that a codex insert was in White Dwarf (still in draft form). I was wondering if anything of this conversation was usable or not for the site. The idea of intentional pot-holes in codices was not something I had considered.
7/27/2012
Natfka
40k, 6th Edition, Rumors, Warhammer 40k, White Dwarf