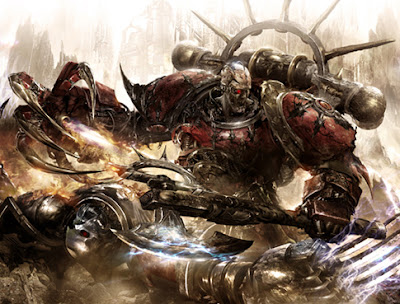 The live QnA we had here last night was a ton of fun, and there was so much information that it was very hard to keep up with it.


Here is the latest and greatest on the QnA, organized and hopefully easy to read. I am tired, and hopefully got all the information down.

Please thank our special guest for taking several hours out of his evening to answer our questions, I know he got to as much as he could. Also great job guys, everyone was at their best, and that is what makes an event like this work. I hope to get things like this in the future. This one was as much of a surprise to me as it was to you.


Chaos Space Marine Codex
As of July 25th, CSM book is set to release in September along with the starter (though not the same week).


General
Having not had an extensive amount of time with the rules, from what I have read so far, there seems to be a theme of if you want it, you can have it, but you have to pay.Basic CSM squads actually end up cheaper than a tactical squad if they take only 2 special weapons and their aspiring champion has bp/ccw.It's possible, however, to clear 400 points on a 10 man squad with a transport.There does seem to be a ton of possible army lists that can be built out of it though, and that's really exciting, but at the end of the day they're just marines and nothing has jumped off the page as 'wtf...OP' (yet)


There are no CSM squads that can combat squad.


Does the codex promote a mixed army, or mono god armies?

You can get away with a mono-god list, but at that point you should be using cult troops most likely.If you're adding havocs to your berzerker army, there's no real point in giving the havocs the mark of khorne for instance. In that sense you're varied.It's not like 3.5 where we'll see thousand son troops with nurgle vehicles to min-max.

Undivided armies are a lot cheaper than cult marines. A lot. Playing undivided gives you many more bodies.


Marks
The only impact on Marks is that HQ models make corresponding cult units Troops.

You can mix/match Marks and Icons.

+1T/FnP isn't as good as a Plague Marine, they're worth their points.

Marks are the same.
-Undivided still reroll morale tests?
-Khorne still Rage
-Tzeentch still +1 invuln save
-Nurgle still +1T
-Slaanesh still +1I
Marks are the same, except Khorne which is Rage, not +1 attack and has a point decrease.

Dedicated transports get the mark of the unit they're bought for, for free. Only units with the same mark can ride in it, (so be careful).


Undivided vehicles can transport anyone.

Other vehicles may buy them. An example would be the mark of khorne on a predator, which gives it a dozer blade at no additional cost, and allows it to roll d6 wounds on a unit it tank shocks


Marks are bought per squad

The "eye of the Gods" table is actually several tables. First you roll to see what table you roll on, then you roll what you get after winning a challenge, killing a monstrous creature or walker, or annihilating a unit in close combat.


One of the tables is Daemonic Gifts.

The chart is 6 charts of 6 options.


Cult units become troops with the right mark on your warlord.

No bonuses for Sacred numbers

No one comes with icons by default, cult troops get marks by default.

Kharne strikes at initiative 5, and he gained armour bane which I guess is new. He's AP3, but for every model he kills (not wound inflicted) he makes an additional attack at initiative 1.
Not quite the same as warrior born as it doesn't keep growing, but it's very devastating for someone with 8 attacks on the charge.

khorne berserkers are AP 5
Berzerkers are 105+21/berzerker
berzerkers are 2 attacks, rage, furious charge, frag and krak grenades, bolt pistol / khornate weapon (ap5 in close combat).
They're 5 attacks at str5 ap5 each on the charge.They can also upgrade to have chainfists in the form of 2 handed chain-axes.
5-20 in size.

Noise marines are overall a little bit cheaper. Sonic Blasters are 36" salvo now. Aspiring champions have access to a whip that prevents enemies from denying challenges. Other weapons are the same


Poisoned only in melee. Can throw their blight grenades to reduce enemy movement speed to 2d6 pick the highest, or if already rolling d6 for whatever reason (i.e. cover, charging) pick the lowest.

Unit size 4-19. 20 points per Rubric. Still slow and purposeful, unless the sorcerer is alive then relentless.

HQ sorcerer are rank 1, can be upgraded to 2.

There is a piece of wargear that lets you reroll up to your mastery in dice after you have rolled, but only each dice once.


Ahriman is mastery 4, can cast multiple powers per turn, gets access to almost all lores and has a default psychic attack much like smite but longer range that he can use in addition to his normal psychic powers per turn.


Characters
Most named characters are the same, but overall a point reduction. Abbadon is the same points and does not make terminators troops.
There are no new named characters.


I haven't read any special character adjusting the allies chart.


Kicks ass and takes names, but otherwise no army wide bonus's are granted
Daemon princes are jump if they have wings.


Chaos Space Marine
70 for 5, 14 for each additional marine.

Aspiring Champion is a 10 point upgrade.

For every 5 models in the squad you get a special weapon. If the squad is 10 or more, one model can exchange a flamer(5 pts) for a Heavy Bolter, meltagun(10 points) for an Autocannon or Missile Launcher or a plasmagun(15 points) for a Lascannon.


Cultists are 4 points each and come in squads of 10-30. They can have any combination of autoguns (str3 ap-) or auto pistol ccw (str 3 ap-)

They can take special weapons, but not heavy weapons.

they respond very well to dark apostles getting an extra benefit when one is in their unit.

cultists cannot platoon, but you can take up to 30 of them in the first place.

Terminators
Will Terminators be able to be given both marks and icons to essentially be cult terminators?


Yes, but it's expensive. Taking both increases the cost of the second and Terminators pay more in the first place.

Terminators pay 50% more for marks. Taking an icon if you already have a mark costs an extra 20 points


Possessed
Possessed get to buy (not roll) up to 3 boons from the  Eye of Gods table.

1-3. Maulers cannot deep strike, but are not slow and purposeful.


Dark Apostles
Yes daemons can be summoned to your CSM icons if you have a dark apostle.

the flyer you get is retardedly good at blowing up things that are zooming.

Bikes
Bikes get nothing new, just CSM on bikes with combi-bolters instead of bolters.


Raptors
Raptors still have access to special weapons, only the aspiring champion can take special melee weapons. They are reduced in points.

The Night Lord's raptors are a lot like vanguard (they cannot charge on deep strike though), but they have 2 attacks base + dual power weapons (ap3) with the shred special rule and are 35 points each.

Dreadnoughts
They can take marks
The mark of khorne for instance gives it Rage and a unique weapon option much-like blood talons except it's a giant rotary saw.

Defilers
They're the same except they have the Daemon special rule, 4 hull points and a 5+ invulnerable save.


Vindicator
Daemonicly possessed vindicators I think will be in every list, with their ability to potentially regenerate destroyed weapons at start of the chaos player's turn


There is a sound-based vehicle upgrade but it's more of a Word Bearers item than Slaanesh.


There is a sonic upgrade for tanks, but it's not a noise-marine thing.

New Land Raider can ram fortifications and you can launch an assault on the occupants, except that you don't consolidate at the end, you remain locked in combat.
If the enemy unit flees they immediately exit the terrain. If the door is blocked (by your land raider for instance), they count as having been caught ala Sweeping Advance


don't know about upgrades being finecast. I know that there is intent to upgrade the basic CSM box to support all the cult troops to be able to achieve any of the weapon combinations from the entries (including everyone having soundblasters).

Daemon Weapons are AP3 and pretty different now, you still wrestle with them. I think its a matter of preference.