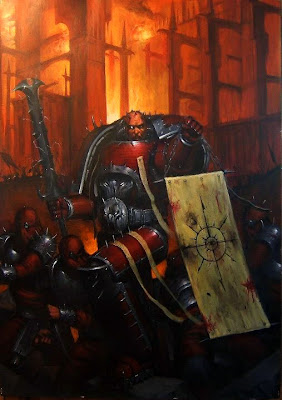 Tonight we also have some Chaos Space Marine rumors just to pick you up after the big let down. These are good, and show off that we will be seeing apostles and warp smiths. Perhaps the set from Neil is correct, and we will see this codex Sept 1, even though the rumors below are guessing at October or November.

Please remember that these are rumors, and such are fickle things.

via 75hastings69 on Warseer
Daemons wave is indeed next, CSM is the next Codex (full release) maybe I should have made that clearer in my earlier post. CSM also get some kind of mechanical Centauroid weapon platform/unit, I'll try and recall all the CSM.
ive made a list of what models the CSM players can expext, note that i dont know if these will all come at once or in waves, some of these (or click fit varients of them) are in the starter box.

Note also that ill not be adding rules or updating this thread in anyway so that will be up to you guys.

Raptors (plastic 2 types)
Dread looks like an angry obliterater on roids!
Obliterators look good but not as good as the "mauler" CC version
Dragon flyer is ok
Two deamonic Centauroid cannon things a bit iffy
Warp smith
Apostles
Cultists
Some odd walker thing
New csm marines (could be recut with added bits? Either way I didn't recognise them as current ones - but then again my 40k fu is weak!)
Chosen very nice too


My understanding is the Obliterators are a new plastic kit that includes the CC mauler variant options. I would "imagine" that these maulers are designed to compete in just that kind of role.


I refuse to comment about finecrast -   (there are obviously characters too, and they're I'm finecast! - iirc new Kharn the betrayer is one of them)

via Erazmus_M_Wattle
I can back Hastings up somewhat here. My moles in GW reported that there was a new close combat unit. Like cc obliterators. Both builds looked lovely. I've been informed that they are going to be two to a box. This reminds me if an older rumour that they'd go up to a squad size of six. It seems odd for two to a box with the current size of three.

The dark apostle is very nice.

As for the dread I've heard nothing.


Perhaps the roided up dread might be a model to represent a possessed dread. I can't imagine they'd invalidate regular dreads. Let's not forget Hastings stated he was only talking about models. No need to panic that our expensive forge-world dreads have been invalidated. I expect the more basic dreads with still be viable.