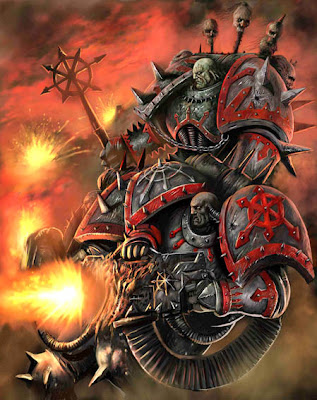 Yesterday was quite the rumor day, and we had a rumor come around that told us that September 1st was the release day for the Chaos Marine Codex. This is contrasting with other rumors that all tend to point to August. So the question is.... Is the codex being released in August or September?
There is a lot of fingers pointing to the codex is coming the first week of August, and the reasoning why of course was listed out very well here...... http://www.natfka.blogspot.com/2012/07/presence-of-faeit-chaos-codex.html

In contrast if you have not read yesterday's rumor about the Chaos Space Marine codex, it is here.... http://www.natfka.blogspot.com/2012/07/new-chaos-rumors-are-here.html

Finally this was pulled from the comment sections here on Faeit 212 yesterday.
via Logan regading yesterdays september release rumor
I dont have the codex but what I know is that the release date is pretty certain its wrong. Defilers being Daemons is wrong. But that doesnt mean they wont get some special save. And I dont recall Eye of the Gods but it seems like something Phill would put ;)


via Bramgaunt on Warseer
I'm staying with September for the Starter Set. August for CSM. We'll know in 1 week, anyway.

My source indicates August release - GW does not traditionally send books 5 weeks in advance, so as to prevent us getting the info to early


If the books were really dispatched to warehouses around the world they won't sit there for long.
So what is going to happen? There are other things that could be on the release schedule... like a flyer wave and the wave of plastic daemons we have been hearing about. Any of these could be a big release on their own. A September release would push back the rumored Starter Set release to at the very minimal a second half of September release or even October.

The codex could also have been scheduled for August, and then pushed back a couple weeks to September, but I think either way, September 1st or August 4th we will be getting the Chaos Space Marine codex. We will find out here in about a week or possibly sooner, as the White Dwarf images and leaks start to flow......