Dark Eldar with New FAQ on the Way 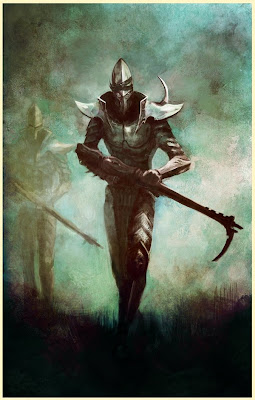 Dark Eldar at this particular moment have a very hard time with close combat weapons in Close Combat. (yes I am working on a series to update my Dark Eldar Tactics section for 6th edition). However, in yesterdays news, something came out of Games Day Chicago regarding Dark Eldar.


A new FAQ is expected for the 6th edition brb in the next month or so, however this definitely shows that other armies just may have updates coming as well. Great News!

via quilava1
Today I attended Games Day Chicago and had a chance to chat with Phil Kelly himself. I mentioned to him my sadness at the lack of a power fist, as our anti-termie combat weapons are limited to the demiklaives. He started to ask me why I just didn't use a huskblade, but stopped himself mid-sentance. A few minutes later, he told me that a new FAQ was on the way. Finally GW has listened to our pleas and brought the feared terminator down a rung in the ladder of brokenness. Almost asked him about Chaos Marines, but decided not to. Would have loved to see his reaction though
7/29/2012
Natfka
40k, 6th Edition, Dark Eldar, Games Day, Rumors, Warhammer 40k