How to Place Aegis Defense Lines without getting Terrain Blocked 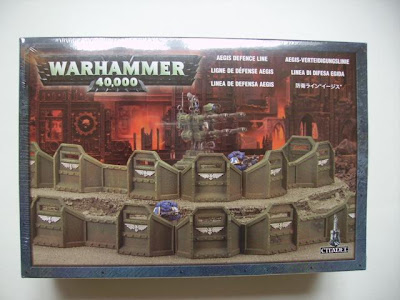 Ok, this is apparently important. 8+ games down now with the new rules, and yes, it took me this long to figure out how to take full advantage of Aegis Defense Lines without getting terrain blocked.

Aegis Defense lines are valuable because of the interceptor rule, and becuase of the they have skyfire. However, in many games I have been using them, terrain blocking during "The Battlefield" phase of setting up the table is quite common. I am here to tell you that its easy to stop this........ Im just slow. : )

Games Workshop obviously did not miss this one, although I apparently did for several games, which is why we get lots of practice games in learning the rules. Hopefully this helps people that have not gotten in so many games and yet want to use the skyfire rules, and aegis defense lines.

Follow me to page 120 of the new rulebook if you have it, or just read along. First paragraph......
Fortifications count against the terrain density limit of the 2'x2' area in which the majority of the fortification lies.

Its simple, since there is really only ever d3 pieces of terrain maximum in an area, if you put two aegis defense lines in a single terrain zone, you have probably just filled it up so no more can be used. If not, and you roll off for who places terrain next... if you win... place a low lying crater somewhere in the zone and you are done.

I find terrain set up to be extremly valuable and just as important as your army deployment. So get to it, practice terrain set ups, and start using those Aegis Defense Lines!!!
7/07/2012
Natfka
40k, 6th Edition, Warhammer 40k