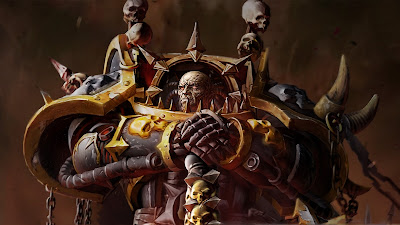 There has been several rumor bits floating around over the last days, and while none of them would take an entire post or had been mentioned before, I did not want to let them sneak on by without mentioning them.

Please remember that these are rumors and some salt is required.

via Darnok at Warseer
Just to add this: another birdy mentioned Daemons in August.

It adds another confirmation to what we already "know": CSM and Daemons are next, with the latest WD being the strongest hint so far. But we'll have pictures and stuff by this time next week anyway...


via Skalk Bloodaxe
On topic- Last Saturday I was at my FLGS in a "welcome to 6th Ed" tourney (no points / prizes, just a good time and open rule discussion) and the owner was talking about a late August release of the new CSM codex. He was right about the 6th Ed release date so I'm sticking w/ that until other information trumps his prediction.


via DrBored at Bols lounge
"C'mon man, you gotta gimme somethin', I need my hit, the rumormill has been dry and I'm tweakin' man! What can you tell me?"
"It's about to rain."
Two new named Special Characters (one is referenced in a BL book, though it is yet to be seen if it's a BL character or not).
Flier, more in line with Hellblade and Helltalon.
'Chaos Dragon', 'Flying Soulgrinder'? Not much to be said. In terms of rumors, it's a resounding 'meh'.
New Terminator kit

My source indicates August release - GW does not traditionally send books 5 weeks in advance, so as to prevent us getting the info to early
7/18/2012
Natfka
40k, 6th Edition, Chaos Space Marines, Warhammer 40k