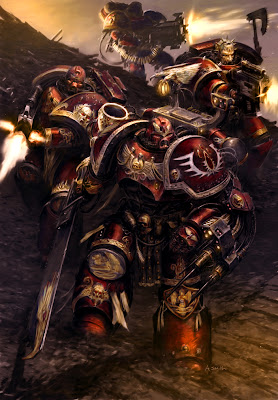 This weeks biggest topic besides 6th edition rules is the inclusion of Forgeworld models being brought into the fold and FAQ's by Games Workshop for standard and regular games of 40k. Elsewhere we ended up with a possible sneak peak into the new starter set for 6th edition which included cultists for Chaos Space Marines.

Chaos Cultist and Cross Codex Rules....
One subject I have been dwelling on behind the scenes is what the first new codex of 6th edition will look like in regards to rules. There is a new option for Games Workshop to have cross codex rules. By this I mean rules that effect another codex, or help bring in other units from another codex.

We all know that Chaos Cultists are almost a given now for the new codex. With cinematic game play a huge goal in warhammer 40k, I can only imagine during the game the cultists conducting some sort of ritual to bring in a greater deamon and unleashing it on the field of battle.

So this brings up the question, can or will Games Workshop bring rules into one codex, that  directly effects another codex. Chaos Cultists would be fantastic to bring in that huge monstrosity of a daemon, and that would be units from the new Chaos Marine codex that are directed at bringing in units  from a different codex.

Forgeworld Goes Mainstream
This brings up a lot of models that would instantly increase the number of units in our games by a lot. Flyers, Anti-Air, and a ton of fortifications (gun emplacements) and more would be hitting our tabletops almost immediately. I just cannot get over this.

I know the naysayers are still grumbling, but hey, last week we were all grumbling about allies. It would really allow some fantastic model conversions, and wonderful new army lists, and would expand the meta so that it would be much harder to grasp on a larger scale.

I am in...... Once again Forgeworld...... if you are listening... your facilities would be welcomed here in the Portland Area. I have the piece of property already picked out for you out here in the Beaverton area... Near Intel, Nike, and Tectronics.

Blood Angels
Now this one is just wonderful. Blood Angels integrating into Imperial Guard ranks. You will start to see Terminator Librarians, and Terminator Chaplains joining the rank and file veterans to lead them into battle. Why?....... I don't think I need to go into this, but Chris, you can expect another order coming your way.

OK, I will a little. With wound allocation the way it is, taking a terminator Independent character and joining it to another squad is just huge. Even though most of the Blood Angels powers are do not carry over to units outside the Blood Angel codex, psychic powers mesh extremely well with Primaris Psykers, so Librarians with storm shields are a huge boost to the strength of a unit....... Think Fear of Darkness and Unleash Rage along with a psychic hood for protection.

Then look at chaplains, particularly in terminator armour. Even though Honour of the Chapter and Liturgies of Blood do not carry over to non-Blood Angel models, you don't need that for 6th edition. page 35 rulebook... and fearless. Units containing one or more models with the fearless special rule automatically pass morale pinning, fear, regroup tests and Morale checks.

Load up with the power weapons sergeants, this blob is going to have some fun.

Terrain
With all the new terrain types and fortifications, its time for me to make some new terrain pieces to quickly get them onto the tabletop. Mysterious Forests and Mysterious Rivers alongside some battlefield debris, like ammunition dumps, fuel reserves, tank traps, etc all sound like a ton of fun to add to my pools of terrain for games. Once I get in the Imperial Strongpoint, fortifications will be set, and I'm ready for some fun and even more unique battles.