Review: Path of the Warrior 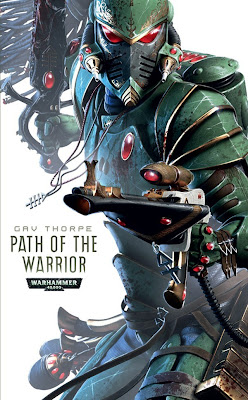 The lives of the Eldar living on the Craftworlds has always been fascinating, and it was enjoyable to finally get a novel that gives some insight to what the world of the Eldar is like on a daily basis. In this case, Korlandril, the main character of the book, leaves a life of artistry to join the Path of the Warrior.

Welcome AKA Korlandril to fold of Authors here on Faeit 212!

The ancient eldar are a mysterious race, each devoting their life to a chosen path which will guide their actions and decide their fate. Korlandril abandons peace for the Path of the Warrior. He becomes a Striking Scorpion, a deadly fighter skilled in the art of close-quarter combat. But the further Korlandril travels down this path, the closer he gets to losing his identity and becoming an avatar of war.

The novel itself is in three sections, Artist, Warrior and Exarch. The Artist is a great little insight into the life of an eldar how they experience the universe and civilian life, very much paving the way for the rest of the novel. This is the shortest of the three sections as it has no battles or such are present here. The section on its own is a bit boring as no real conflict occurs but a necessary beginning of the book.

As the novel progresses into the second section Korlandril advances down the path of the warrior and you get to meet the other, some interesting, characters of this particular warrior shrine. Also providing insight how each shrine, not just striking scorpions, have their own training techniques and traditions depending on the Exarch who leads them. This section also includes a couple of battles as you learn about the ways of war, and the battles themselves, from the point of view of the squad. Also a trip to the healers which has not had much light shone on within the codex or other Eldar books and so is cool to read about

The third section gets apocalyptic and Korlandril becomes/absorbed into an Exarch, this was interesting as it only really hints to the process whereas in the book it fully expands on this. The Eldar also bring out the big guns in the final battle of the book which is continued through the other two books (albeit through different perspectives). You get a good feel of how an entire Craftworld mobilizes for war, this bit drips with pure Eldar awesomeness.

To sum up, I enjoyed this book a lot as it went into a wide range of different aspects of the Eldar; it was immersive and felt like you were almost on the Craftworld with Korlandril. Also it felt like 40k with losses on the side of the enemy and of the Eldar so it does not feel like Korlandril is layered in too much "plot armour".

I would recommend picking up this book if you are at all interested in what the Eldar are like as warriors and their less warlike selves or just want a good 40k read.
This is the first of a trilogy with the others focused on the Seer and the Outcast and the three are interlinked. The Path of the Seer is out already and is just as good as Path of the Warrior and progresses through the final battle. The Path of the Outcast is out in September which will finish the series and the final battle which I, for one, am very much looking forward too.