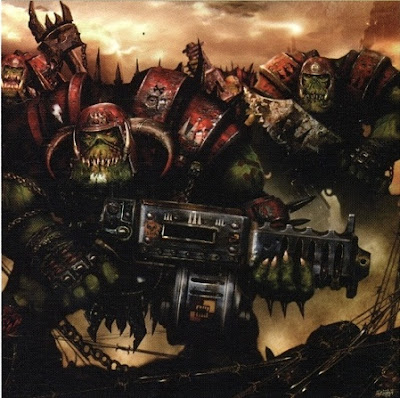 Im approaching somewhere around 16 completed games of 6th edition, and it was about time to start doing some battle reports. I do feel like I am getting the rules down, and when Chris came over for a 2500pt Imperial Guard vs Orks match up, we were able to complete it the game in somewhere between 4-5 hours. That includes a few breaks, and going over some rules.

On the match up side, he brought his orks with a ton of dakka, some deep striking tricks, two Ork flyers and of course snikrot. On my side, there was an equal amount point wise of Imperial Guard and Grey Knights. Forces included a close combat large platoon with 4 heavy weapon teams to man the 2 bastions, two full squads of purifiers, and two strike squads.

The game was mission number 5 "The Emperors Will" with a "Hammer and Anvil" deployment.

I will have to say that first and foremost, terrain set up and deployment ruled the game. The battlefield is such a large part of 6th edition, and this game proved no different. I was able to set up a Y formation of rocks with the line of sight block on his end. This meant one side of the board between us, was an excellent alley for the player that was able to take advantage of it, and that ended up being my plan. The rest was rather with a lot of open space, which is where the two Ork looted wagons would attempt to push through.

My biggest error was almost immediately transparent, as I had deployed my IG Close combat squad right in the in the target shooting zone for a large number of lootas. They were pelted on the second half of round 1, and resulted in my General getting cut down before the action really started.

Round 2 Was where the Orks spun their trap.
Orks appeared out of deep striking directly infront of a small 5 man strike squad. Somehow, they managed to stay clear of my warp quake from a full 10 man unit closer to my bastions. The assault was going to be ugly. Meanwhile, snikrot and gang ran in along my back table edge, and a 30 man ork squad entered the Y Canyon preparing to assault the Grey Knights there. On the other side coming through the clearings, two ork squads charged through the open terrain, both within a 7-8" assault range.

To top it off, Ork flyers flew onto the board, and both intercepting Quad-guns were unable to down a single aircraft. things were looking bad, and I prepared for a smashing failure.

The Ork stormboyz (I think thats what they were), rolled to assault from 3"s away. Double 1's was rolled. The two ork units charging across open ground also failed their assaults, and snikrot and squad failed to produce any real results coming on from the back board edge. That left the 30 man squad as they charged a 10 man unit of purifiers. Purifying Flame enveloped the orks, wiping out a good number of them before the combat even started, and the rest were cut down promptly by the remaining purifiers. 5 dead purifiers, and the ork mob was cut down.

What had looked like a quick imperial defeat had turned into a shooting slaughter the next turn. Orks were gunned down, and very little survived the onslaught over the next two rounds of play.

At this point, I had the first kill with a looted wagon going poof round 1. He had killed my general round 1 in return. Both bases now sat on opposite sides of the field, and looked impossible to reach. As the turns continued, a full squad of purifiers was able to mount up into their rhino, and dart across the field. Being able to move 12 and then go flat out another 6" makes a huge difference in 6th edition. This gave me the final linebreaker point needed, as turn 5 came to a close, and we called the game.

He still had a ton of shooting left, and I still had quite a few forces moving quickly across the field, but I had parked my rhino behind some ruins, and with 10 purifiers disembarked behind a now wrecked vehicle and completely out of sight, there was not much Chris could do.

We called it in 5, although the dice were calling for another round. The games highlights really were during set up with the terrain working in my favor, and round two, where Chris had some horrible assault rolls and results. Game results were Imperial Guard/ Grey Knights 5 to Orks 4. Still a close game.

I promise next time we will get in some video and pictures.
7/21/2012
Natfka
40k, 6th Edition, Battle Reports, Grey Knights, Imperial Guard, Orks, Warhammer 40k