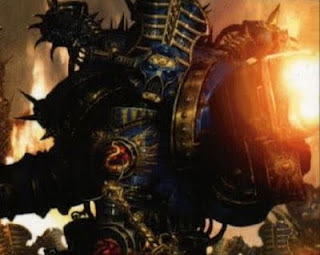 The Chaos Space Marine codex seems to be the very heart of discussions, even amidst a very nice Chaos Daemon wave. So lets take a look at a small Question and Answer session by TastyTaste on just that subject.


Please remember that these are rumors, and TastyTaste is answering with the best knowledge he can. He just gave us a major rumor drop with tons of information. Knowing every specific bit at this point would seem difficult at best. In other words, he is answering what he can.

via TastyTaste on Blood of Kittens
So does Soul Blaze replace the AP3 on 1k sons bolters, or is it in addition to it? And since rapid fire weapons can be fired on the move now, do they still have SnP?

[Are just like before, but with Soulfire]
They are just like
1) do Chaos bikes get a reasonable price reduction, similar to C:SM ones?
[No Idea]
2) do Havoc weapons options get cheaper?
[Yes almost as cheap as Long Fangs]
3) do Terminators come standard with Power Axes in their new cost?
[I think you still get to pick Sword or Axe your choice]
4) are there any FOC shenanigans like moving Terminators, Bikes or Raptors to troops?
[Nope just cult troops]
Do the Thousand Sons get any new options (say, like Heavy Bolters?)?
[None that I know of]
Even with all those upgrades and tables, the codex somehow sounds ”down to earth” like the current DA codex. Does it feel the same? Like a careful approach to a new edition of rules?
[Seems careful, I would say they are just copying there approach they used with Fantasy]
- How do Icons and Marks work? Are Icons still bound to one model and lost whet it dies?
[No idea]
- Can Vehicles and special units (Obliteratiors, Dragon, etc.) be marked?
[Some can some cannot]
- Which weapons of Plaguemarines are poisoned? CC weapons, Shooty weapons or both?
[No idea]
- Do marked Sorcerers or marked Daemonprinces also make cult units a troop choice?
[Princes no, Sorcerers Yes]
7/25/2012
Natfka
40k, 6th Edition, Chaos Space Marines, Rumors, Warhammer 40k