Uncovering the The Age of Sigmar 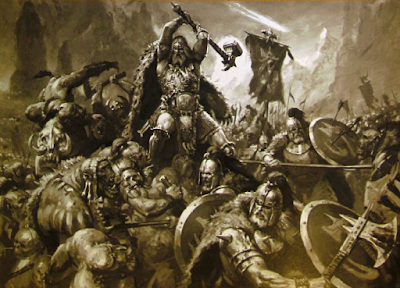 With a new game or edition of Warhammer Fantasy on the horizon, we have been looking hard at just what the new game will be about in background, and rules. Here is a possibility sent in today from a reader here on Faeit 212 that had a few minutes with a upcoming novel called Age of Sigmar, and what he was able to gather from it.


Consider this rumors at this point.

I had the chance to spend about 20 minutes with the upcoming book Age of Sigmar by A. Lanning (a novel, not the game) that deals with the aftermath of the end times. The prologue makes it very clear that Sigmar survives and the whole plot takes place after the end times. Nothing that I have read suggests that there is any time travel involved. It is just a continuation of the story on a much broader scale. I think it is safe to say that the game of the same name follows the story of book and doesn't establish a totally different setting.

In the prologue Sigmar survives and pulls the winds of magics through the gap into the warp. In the process the pure untouched currents of the warp are tainted with the personifications of the winds - the Incarnates. This is the birth of eight new minor gods.

But most of the book is not about sigmar or the incarnate gods directly, only three chapters as far as I could see were written from their perspective. The rest of the book is an ordinary fantasy adventure story. The book follows Martellus Mann, a reikguard quartermaster who was slain in the end times, but is reborn in Sigmarshall, the domain of Sigmar.

I then skipped some hundred pages forward so I don't know what happened in the aftermath, but in the middle of the book, he has gathered a large party of heroes from many realms and realities in a quest for something called the spirit mill or soul mill or something like this. I know for sure that there are several worlds and that the protagonist can travel from one to the other but I didn't read a chapter where this was described in person and I don't know if this is part of the game world.

In the middle of the books there is a huge betrayal, sigmarshall is under siege by the armies of the chaos gods. incarnate fights against incarnate and all are cast out from the warp. Mann starts a search for sigmar in the believe that he was reborn somewhere. The second half of the book is set on a world called Regalia. And here it gets interesting: Regalia is the only area/realm/world that has a map in the book. Regalia looks like the old world or earth and has very familiar regions and city names, etc. But there are some huge alterations: there is no Ulthuan, but a huge landbridge that connects Canada with Scandinavia.

There are no elven or dwarven sounding cities or lands but strange sounding names in the Americas and Africa that don't fit any race of the old setting. There is no empire, but lots of different states in Europe and Asia - Nuln, Middenheim, etc are there, but Altdorf is not. There are more things you can deduce from the map if you assume that it represents the setting of the game, which I strongly think it does. Mann finally arrives in the city Heldenheim that is build in the Worlds Edge Mountains just in time to visit the crowning of emperor Karl Franz where he announces his plan to conquer the whole world. Mann thinks that he has found Sigmar and the book jumps to the epilog.

Sigmar is chained somewhere and starts to dwindle, but then he smiles and proclaims that his great work to eliminate the chaos once and for all has only started. He vows to conquer the warp.

I think it is pretty obvious that the game will be set in this new world. Why would they establish all this in the book when the game doesn’t use it at all, but I haven't seen any actual game material (though there is a slim chance that I get a glimpse this weekend - fingers crossed), so take this into account.+ 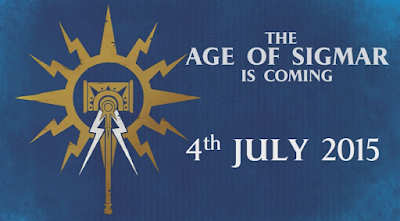 Listen carefully. Can you hear it? The cruel laughter of dark gods? It dances on the winds between worlds, striving to be heard, for the ruinous powers bore easily, and they seek tirelessly for new realities to conquer. Where there is life, Chaos will find it, and misery and bloodshed will soon follow.

The world is gone, but all may not be lost.

The descendants of the Old Ones left before the Chaos moon destroyed their homelands, that much is certain. But where did they go?

And if they escaped, did anyone else?

Can what is dead ever truly die?

Who remains lost in the void?

To what does he cling?

And when a world dies…