Age of Sigmar, Lots of Information and More Leaks 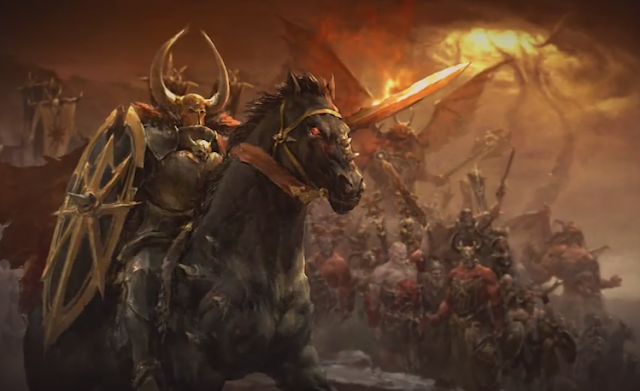 The Age of Sigmar instantly has had a polarized reception and that really was to be expected with the demise of Fantasy. There is a lot more information coming in, including that a model is rumored to be given for free with the White Dwarf.

Check out the Latest Age of Sigmar information and images.

Please be aware that the information below are rumors. Salt is always required.

via Darnok on Warseer
The official part first: "Age of Sigmar" is the first box set in the "remake" of Warhammer, with the first pre-orders up on the 4th of July, to be released on the 11th.

The most recent of my bird singings:
Quote Originally Posted by Some Birdy
Concerning models:
humans much larger in scale than standard WHFB humans
not just more bulky and differently proportioned, but I mean the models themselves stand taller, they're just a different scale as WHFB humans (each about the size of a Terminator)
about the model compatibility, and they just went like "yeah well if someone really wants to use their old armies they can, but we didn't intend the new models and old models to be compatible, we think larger models are the way forward, blah blah"

Concerning rules:
it's really for small battles and not as deep and strategic like LOTR was
very simplified, seems intended for short quick beer & pretzel games, lots of random and little strategy
no way you can use it for existing warhammer armies, so with the scale difference and incompatible rules I don't think there's any point in rebasing your existing collection
'post it note' size of the rulebook is pretty much accurate
very much revolves around your commander, which has elaborate special rules
rest of the squads feels much as filler for the commanders to smash up and feel good about
no info yet about anything planned for really large-scale battles

This box set is not the full deal though. There will be a "big rulebook" coming shortly afterwards. That one should cover larger battles, I have yet to hear anything definite on it though (unless I missed something ). Also, even if only a guess:

I would expect to see nothing but more Humans and Chaos stuff for a couple of months along with a bunch of terrain (so folks can build 'new look' tables) and then the Skaven stuff to hit.

Comment of mine: I have been told it'll be weeks rather than months of new "WHF" releases. And early August will see the "big Warhammer version"; this AoS is some kind of a game on its own - specifics should leak as soon as the GW store managers had their meeting on coming Monday.

via Grey Seer Kwokka on Warseer
A friend of mine is good mates with a local GW store manager (well, the one dude who runs it) to him and showed him the listing in the computer system. $200AU.