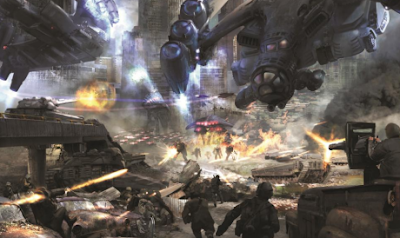 There is quite a bit going on in the Dropzone Commander World.... and not being publicized like it should.

Alliance Is On Board!!!!
First up.... the game is now being distributed by Alliance, making the game very accessible like it has not yet been before. I had word of this earlier, but I have been waiting for reports from the community that this awesome game that we have been talking about for so long now can be purchased in just about every place in the US now.......... Awesome.

For those curious, I was told Alliance was picking up the entire model line, and getting ready for Dropship as well!!!!

Here is what I was just told by a reader here on Faeit 212
Alliance now carries Drop Zone Commander, with advertising in their
latest monthly magazine GTM vol. 184, and stock will be shipped in August.
This means that there may be a way to get it in Canada (as Alliance
distributes in Canada and the US). I'll confirm with my shop and let you
know.


New Rules
Second up..... The recent and yet very quiet pre-orders for UCM and PHR. Both of these are available now and I was concerned that these models were going to be released without rules. Apparently not on the watch of Hawk Wargames.


UCM Legionairre Mortar Teams
One thing I want to point out about the new teams... is the types of units that can share their transport!!!!! New units revealed! Heavy Hazard Suit Teams and Anti-Aircraft teams are new units that are mentioned in the new rules for these guys.

They are available now and you can see the new rules for them here
http://www.hawkwargames.com/products/legionnaire-mortar-teams


PHR Immortals AM Rifle Team
While no new infantry units are revealed with these rules, OMG E7 with an acc of 2+!. 24" R(c) with shaped charge and sniper. Whoa, these guys are nice.  One catch though... they are listed as RARE and a little expensive on the points. So only 2 can be fielded in a clash, 3 in a battle.