Home » Age of Sigmar » Games Workshop » News Headlines » Rumors » The Future of the Age of Sigmar, Thoughts and Insight

The Future of the Age of Sigmar, Thoughts and Insight 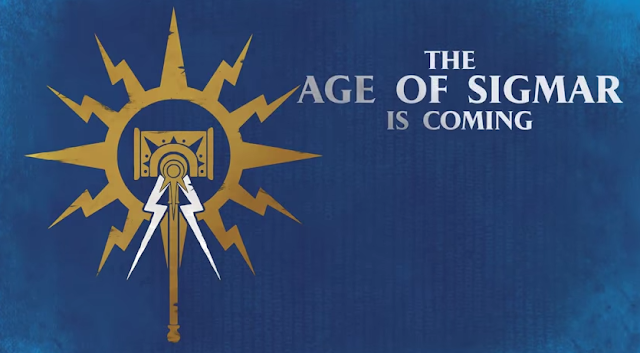 
This game so far has all the makings of a successful Tabletop Game (my opinion), but there is still a lot of unknowns. To be here at this particular time, when this game is launched, is a good time to be in the hobby.

I don't have any information on the validity of what is below, but I think you can make that for yourself. Consider these rumors and opinion.


via an anonymous source on Faeit 212
No doubt you get many emails claiming to know all sorts of information from
secret sources and the like, so here’s another one for you to add to the
collection. I’ve become somewhat cynical with how things are currently
being run in the design studio, specifically with the direction of
Warhammer Fantasy, I will be following the lead of others and won’t be
staying for much longer, I’ve one final project that I’ve always wanted to
be involved with and that I want to see through. As something to provide an
initial point of reference, Jervis has been reading Paradise Lost recently,
last Thursday (the last time I was in the office) a copy was sat on his
desk under a 10-up Space Marine helmet he uses as a paper weight.

It has been interesting watching from the inside looking out. Particularly
over the last few days, all those leaked bits of information really seem to
have got a lot of people talking. The reasons for the changes to Warhammer
are well documented, and they were not something that was decided in a whim
on a rainy Thursday morning. The End Times were there to let us wrap things
up, try out a few new things and then draw a line under what has gone
before. Personally I loved End Times and would have liked this period of
the game to have continued for longer and really explored.

The new start that begins imminently is just that, a new start for
everyone, will we lose existing players? Almost certainly. Will be attract
new players? We wouldn’t have entered into this project if we didn’t think
we could. This is not an evolution as we’ve had with previous editions,
this is a whole new beast, think Christopher Nolan’s Batman trilogy
compared to what had gone before. Some won’t like the new look of the
miniatures, or the rule set, the role of magic and spells is certainly
going to be something that divides the community, I miss the old system and
think we’ve got the changes to magic wrong.

So why come out of the shadow, I’m bound by a contract, I can’t be giving
clues as to what you’re going to see next month or the month after, what I
want to do is to say that not everyone working on this project agrees with
the way things have gone. I’m quite happy to tell anyone that will listen
that I don’t like the aesthetic or direction that the imagery has moved in,
I’m not the only one, many of those I work feel the same, many have had
models that they have spent hours and hours creating and rendering canned
because they don’t fit with the imagery going forwards. Artwork that will
never see the light of day and narratives that will never be used..

I want the community to bear in mind that store managers have not been involved in
the process, ranting at them because you don’t like this or that in the new
game really isn’t helpful and isn’t fair on them, they are doing their job,
many I know will openly tell you what they think of the new game, this
isn’t Company policy, we’re not the Thought Police, we can’t control what
people say, not yet anyway.

Oh and while I’m out of my shackles, something to ponder on, all the “new
Forces” have not been completed, can you imagine how much work needs to go
into restarting a game like Warhammer. No, what you’ll see over the coming
weeks and months are selected highlights from the next 9-12 months, the
success of the initial releases will determine the rate at which subsequent
releases are made and the development of the range as a whole. Numbers have
been thrown around internally as to what sort of sales need to be made in
the first month for the AoS release to be called a success, our jobs depend
on this success, we have not developed a product that is designed to fail
as come have commented recently.

A final glancing blow, the AoS rules and what they will build into in the
future are not designed for peoples existing miniature collections. That
wasn’t part of the remit, my advice is to use existing collections to proxy
the new range, the material to be released for existing armies has not been
extensively tested mainly because in the process of testing we found that
too much work was needed to get things right. The nature of the new game
makes certain units redundant as they don’t offer any real advantage over
other units anymore. The webstore will be running down stock levels over
the next 3-4 months, recent print runs will keep popular parts of the range
available for much longer than that so no need to panic buy, unless you
love your square bases that is :)

Feel free to use whatever information you see fit from my ramblings. The
whole 9 realms that are being reported elsewhere is total rubbish, as are
those names of the factions and races, do people really think we're that
dumb?
6/30/2015
Natfka
Age of Sigmar , Games Workshop , News Headlines , Rumors