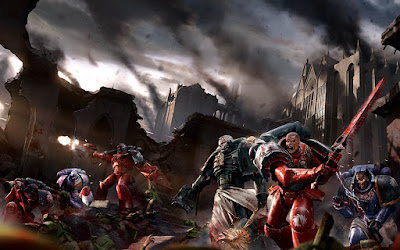 There are new pics circulating on the Space Marine Datacards. They look nice, and the images show seven cards depicting the Chapter Tactics rules and three on Combat Doctrines.


Here is what they are via a reader on Faeit 212
translated by nrewbtw here on this site.
http://diesirae40k.blogspot.com.es/2015/06/rasgos-del-senor-de-la-guerra.html

Crimson Fists:
1: Pain is for the lesser Warrior: Warlor has FnP
2: Stubborn Defender: Warlord and Unit have Counter Attack and Stubborn
3: Veteran of Rynn’s World: Warlord and Unit have Hatred (Orks) and Preferred Enemy (Orks)
4: Experienced Instructor: If the Warlod doesn’t Attack in the Shooting Phase and doesn’t Run, an enemy MODEL in 12” around him can use his BS in this phase
5: Not ready to die: Warlord has Eternal Warrior
6: Heir of Dorn: Warlord and all Crimson Fists in 12” have Fearless

Black Templars:
1: Masterful Swordfighter:
+1 to WS and Attacks of the Warlord
2: Furios Rage: If the unit the Warlord is in fails Morale Test in the Psi or Shooting Phase, it does not fall but, but moves 2d6 inches towards the next enemy unit (but has to stop the usual 1” away from other units)
3: Loathe the Witch: The Warlord has Hated (Psyker) and Preferred Enemy (Psyker)
4: Honor requires Battle: You can re-roll failed Attack rolls for the Warlord and his unit
5: Loyal to the Oath: The Warlord gets Fearless. Additionally re-rolls failed rolls to hit in Challenges.
6: Iron Resolve: The Warlord and every friendly Unit in 12” around him re-roll failed Morale, Pinning and Fear-tests
6/11/2015
Natfka
40k , 7th Edition , Gaming News , Leaked Images , News Headlines , Space Marines , Warhammer 40k