The Age of Sigmar- White Dwarf and Rules 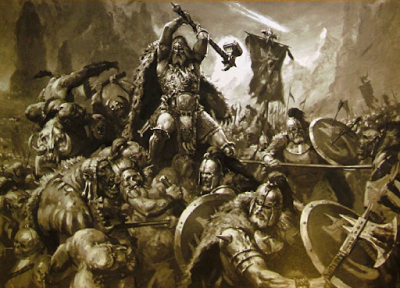 There have been a bunch of leaks concerning the rules, and what will be in White Dwarf, and this bit captures a lot of that. There is more to come, and we will see just how the Age of Sigmar plays out down the road.

This is obviously just the beginning, there will be more rules, more tactics and gameplay released with more models etc. Get ready to learn a new game system.

via Dr. Caligari as seen on the Bols Lounge
http://www.lounge.belloflostsouls.net/showthread.php?56937-Age-of-Sigmar-Rumor-Roundup
White Dwarf
– WD 75 WILL include a free Stormcast Eternal.
– WD 75 will include all four pages of AoS rules in it.

Rules
– There are no point values in Age of Sigmar.
– All units will be represented by warscrolls.
– If your side is severely outnumbered, there are several “Sudden Death” objective you can pick from that success will result in your victory.
– Warscrolls have all the rules for the models with them.
– New models will come with warscrolls in their boxes.
– Army books are gone.
– Bases will not matter.
– Measurement is based on closest point of the models. (So yes, a sword that thrusts well past your base is where you’ll be measuring from.)

Turn Sequence:
Hero Phase - Spellcasting and Command Abilities used here.
Movement Phase - Movement in inches, on warscrolls. 5" seems like the new standard. Cannot move within 3" of the enemy during the movement phase. Running is a d6 added to the distance. Flying ignores scenery and friendly models, but still cannot come within 3" of the enemy. Units that start the movement phase within 3" of the enemy can remain stationary or retreat (moving up to full movement away.)
Shooting Phase - Units that ran or retreated may not shoot. Roll to hit and wound as normal.
Charge Phase - Within 12" of enemy. Could not have ran or retreated that turn, nor be within 3" of enemy. Roll two dice and that's your charge distance. Must end within .5" of enemy or charge fails and no models move. No charge reactions.
Combat Phase - Charge or units within 3" of enemy unit. Two steps: 1.) Pile in, may move models in unit up to 3" towards closest enemy model. 2.) Attack with melee weapons.
Battleshock Phase - 2d6 + Casualties. For each point the total beats the unit's bravery, one model flees and is removed from play. Bravery is +1 for every 10 models in the unit when the test is taken.