Something Interesting with Chaos 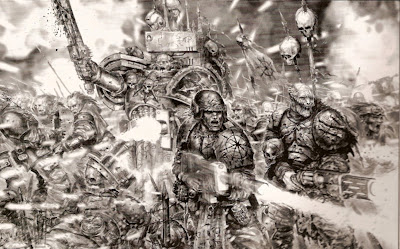 Chaos Marines are an army that many people would like to see expanded upon for Warhammer 40k. Its felt a little neglected of late, of course that could be said for several armies. This rumor is discussing the success of recent releases and that this is pushing forward the release of a new chaos faction.

This rumor set I have no real idea on its validity, especially since it mentions models based on Dark Vengeance. I had thought the Crimson Slaughter was already released, but a Lost and the Damned Army would be cool.

Please take this one with some extra salt at this time.

via a source that wants to remain anonymous
he said the most recent line of models in 40k sold above expectations so they're going to do push forward a chaos faction for the start of next year based on the models in Dark Vengeance. I checked whether this meant the Lost and Damned army and was told yes, but with a different name.