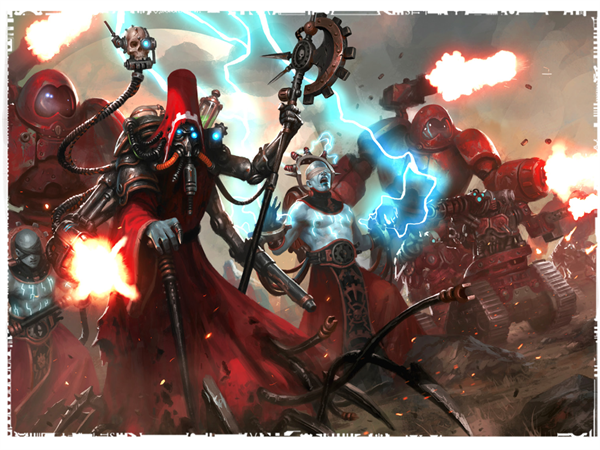 There was a large information dump by someone that has the codex. It all seems to match up, so I compiled it into a single article for people to get a feel for the new Cult Mechanicus. For the most part it looks like a solid codex, or at least a lot of fun.


Please remember that these still must be considered rumors, until the codex is officially released later this week.

via Iuchiban via Warseer
Hi guys! Here's your spanish favourite codex leaker of all times!!!
I already own my copy of the Cult Mechanicusc codex.

Relics:
- 2+ Armour save to bearer + all weapons in the unit have the Cognis SR
- Bearer and unit gain "It will not die" SR
- Every turn may choose to identify a Mistery objective or observe an enemy vehicle. All rolls to penetrate againts an observed vehicle may be re-rolled, as well as glancing hits.
- One CC weapon that only Works againts vehicles. Make only one attack, if hit, roll in a table:
1: Controller of target vehicle may restore one hull point
2-3: Controller of weapon decides if vehicle loses one hull point or restores one.
4-5: Same as above but 1D3
6+: Same as above but 1D6
- Kastelan protocols have an inmediate effect. Previous protocol may not be chosen anymore.
- Model gains 1D6 CC attacks S4, AP5, Shred

Canticles:
They are declared at the beginning of the turn. 3 possible effects depending on the amount of units in your army. Cannot use the same one twice.

Dominus (105)
- 2+ armour save
- 3 wounds
- Volkite Blaster (S6,AP5, Heavy 3, Deflagrate (Inflicts one additional wound per unsaved wound)
- One pistol that fires five shots, S4, AP6 (Cannot translate the name to English)
- Power Axe
- Mechandrite Harness: May fire all his weapons during the shooting phase, and his CC attacks have the Haywire SR, +1A at I10
- Skrutinizing Servoskull (Free translation): Every turn he may indentify one mistery objective
- 5++
- Relentless
- FnP
- IC
Once per turn, on a roll of 2+ he may restore one hull point of a vehicle in base contact, or one Wound of one model of his unit (Skitarii or Cult)

Equipment
Carachters may purchase a Stasis Field:
The bearer and the unit get a 2++ save as long as they are "Gone to Ground", but the WS and BS are reduced to 0.

There are 4 formations:
- Cohort Cybernetica
1x Dominus
2 Kastelan Robot Maniples
Kastelan protocols have an inmediate effect when chosen
For every Datasmith and Dominus one Robot may fire to a different target.
Dominus and the 2 maniples are a single unit. Dominus may not abandon the unit.

- Elimination Maniple
2-3 unitos of Kataphron Destroyers
1-3 Kastelan Robot Maniples
If one Robot inflincts one unsaved wound or a penetrating hit with a weapon with the Luminogen SR, the rest of the formation gains +1BS and ignore cover when firing to that unit.

- Holy Requisitioner
1 Dominus
2-3 Kataphron Breachers
Deep Strike
They have to stay in Reserve. When deployed, the Dom¡nus does not scatter if deployed at 6" or less of an objective marker. Breachers do not scatter as long as they arrive at 6" or less of the Dominus.
They have the Zealot and Counterattack SR when at 6" or less from a objective marker.
5/25/2015
Natfka
40k, 7th Edition, Adeptus Mechanicus, Cult Mechanicus, Games Workshop, Gaming News, News Headlines, Rumors, Warhammer 40k