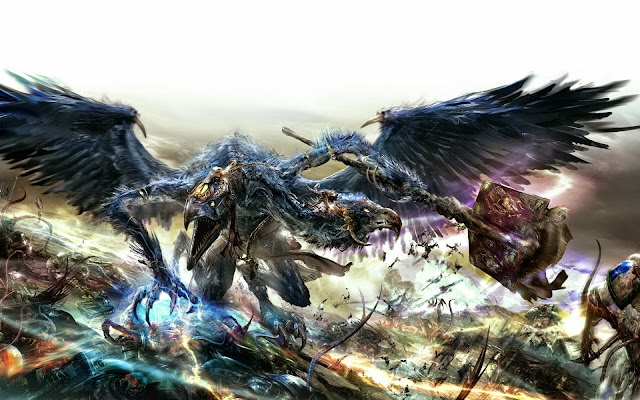 The latest rumors have been heading in the direction of a Dark Angel vs Tzeentch campaign that will take place this summer. With it new Dark Angels, and a new Lord of Change. This rumor bit adds to that with a new Tzeentch Daemon character that was seen.

these rumors come on the heels of the discussion that has been going on. To catch up.. here is a link to see what has been discussed already.
http://natfka.blogspot.com/2015/05/dark-angels-and-daemonkin-release-rumors.html

via Dark Apostle on Faeit 212
they will add a new daemon character for the campaign this is one of the objectives for the DA to kill off before a mighty Lord of Change is summoned also it is a great wizard/psyker consider it to be Ahriman but in daemon form, or that is the fluff more or less for that model. not sure on release time. picture i was sent is of a model that is not a kitbash or a conversion, new sculpt.

it is not the alleged LOC model, this is in addition to the LOC.

disbelieve until it releases you will anyway. (or some will, others will just apply a healthy dose of salt and appreciate the info's nonetheless)
5/24/2015
Natfka
40k, 7th Edition, Chaos Daemons, Gaming News, News Headlines, Rumors, Warhammer 40k