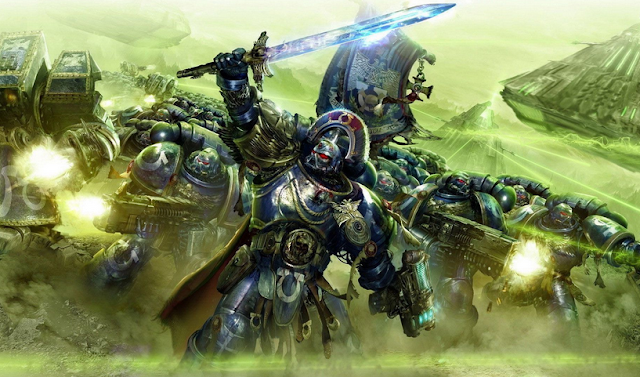 While there were 4 rumored upgrade packs, thus far we have only seen two, Ultra Marines and Dark Angels released alongside the Assault Marines. The rumors right now speak of Blood Angels and Space Wolves also getting upgrade packs, but leaks have not confirmed them this week, nor exactly what they are.

So while we wait for leaks to confirm to this week's releases... here is the latest talk on Space Marine upgrade packs.

via Darnok on Faeit 212
I've been told there would be two more upgrade sets, so UM and DA are only the first half of that. Devastators will be the second kit after Assault Marines. Add a few clampack characters, and that's the SM release. DA will only get a codex and a character (plus this upgrade frame). I don't know whether the older DA upgrade sprue will remain in production - I hope so.

It seems that the other two upgrade sprues are for BA and SW (somebody found the corresponding redirects on the GW-page)... well, weird. Those better be for vehicle bits, as infantry upgrade sprues for BA ans SW make absolutely no sense whatsoever in the current range. And I don't see GW scrapping half of the SW and BA range in favour of two small upgrade sprues.
5/27/2015
Natfka
40k, 7th Edition, Adeptus Astartes, Gaming News, New Releases, Rumors, Space Marines, Warhammer 40k