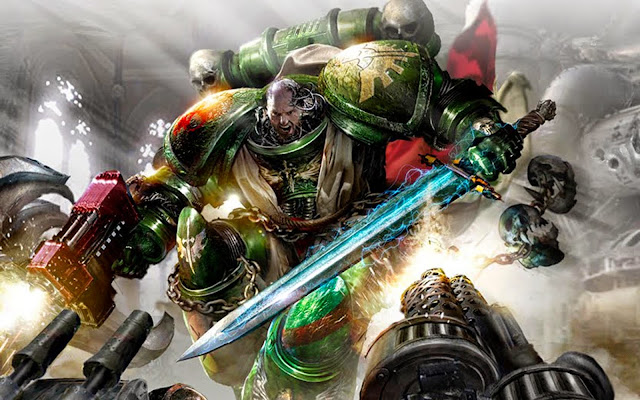 There has been a lot of talk on the site about what is coming over the next few months and into the fall. It was time to get it all down on paper so that it can be seen all in one place. The primary subject of course being a Dark Angels campaign vs Daemonkin (Tzeentch if I recall correctly).

Please remember that all of this is still rumor, all the way up until we get some official information.

via Jarkko Airaksinen on Faeit 212
I heard about half a year ago that there will be DA vs. Daemonkin campaign set after SM release which includes also other Imperial factions (such as forces of Mars) in the later parts as well as a "new" faction like Lost and the Damned which uses SM figures with chaos upgrade kits and with different painting schemes.

Primary campaign boxed release will have new limited edition HQ for both forces and after the campaign DA will get their codex and then it is time for Daemons and CSM to be updated to 7th.

Daemons and CSM will be fall release with Fantasy in between those releases.

via Nightfury on Faeit 212
This sounds a bit like what I've seen except i haven't seen anything 40k other than a few shots of some dark angels models&print and that leads me to believe they will be the campaign codex jump.. the assaault marines and devs are definitely getting grav weapons.. ultra marines are def the 40k posterboy lol

via Dark Apostle on Faeit 212
daemons is what i was told....i have on excellent authority that what NF says here is 100% correct. a character and a squad (for Dark Angels). daemonkin will release after with campaign with DA v TDK.

(really if you must, choose to disbelieve me, but don't disbelieve our good pal NF, he is on the money this time)