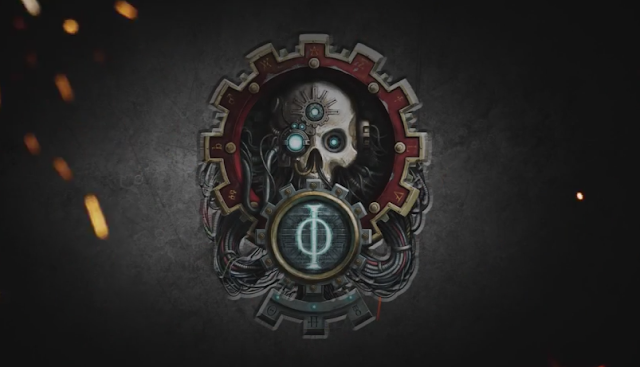 This week's Cult Mechanicus releases will only consist of the Kataphron Battle Servitor box set. From the box set which looks to contain 3 battle servitors you can create either Kataphron Destroyers or Breachers. Readers have sent in translations from the German leaks so that we can get a better look at the new units that are being shown today.


Here is what rumors from about a week ago (which look verified) are saying about each of these new units.
http://natfka.blogspot.com/2015/05/cult-mechanicus-troop-choices.html

the other 2 special rules are
- "anthem of the onmesiah" (rough translation, new rule)
- bulky

come as 3 models, up to 9 additional

none of those weapons appear in the Skitarri Codex, seems like they get
new ones/heavier versions of exisiting ones.


via Atia and Others
The previews for next week say:
- Electrifying
- Lords of Mars let loose
- An exclusive formation


Lots More Here as well
via Atia on Bolter and Chainsword
http://www.bolterandchainsword.com/topic/307360-rumours-cult-mechanicus-knights-kataphron-leaks-pg-64/page-64#entry4039491