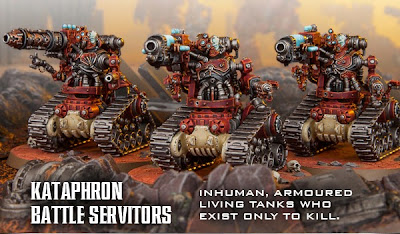 Up today for pre-orders are the new Cult Mechanicus Kataphron Battle Servitors box set, allowing you to make either the ranged Destroyers, or the the close combat oriented Breachers. Rules for these are in the White Dwarf, and we have been seeing them extensively throughout the week.

Destroyers
Completely severed from concepts such as ethics, morality, or even thought, the Kataphron Destroyer is nothing more than a living weapon, wielded by Tech-Priests to further the data-hungry march of the Machine God’s chosen emissaries. Absolutely covered in incredibly powerful weaponry, the Kataphron Destroyers are the Adeptus Mechanicus’ scorched earth policy - nothing will be left of their targets but molten sludge.

Breachers
Much larger and far more powerful than the servitors used by the rest of the Imperium, Kataphron Breachers are not so much born as assembled. Fulfilling the role of living shield and battering ram, they are used by Tech-Priests to smash apart enemy lines and fortifications on their insatiable quest for technology to assimilate. Utterly deadly at close-quarters, their heavily-armoured torsos and covered tracks carve a brutal swathe through anything in their path.