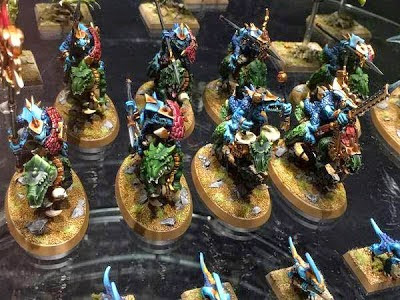 Warhammer Fantasy is right around the corner, and this little rumor bit has the new edition being released June 20th... right after Space Marines it would seem. 6 Factions, picking up right after the End Times, and two games in one... skirmish and full scale.

Did I mention Round Bases have been spotted in "just received" clampacks of Skaven? There are pics below of just received new fantasy models from Games Workshop.

Please remember that these are rumors. Even the images right now should be considered rumors until we see more.

via Bird in the Trees posted by Larry Vela on Bols
http://www.belloflostsouls.net/2015/05/wfb-9th-latest-game-overview.html
– WFB 9th is simply called “Warhammer’
– New rules provide for two games in one:

– The small scale game has heavy limitations on models that can be used such as exotic units and units that would be unbalancing at a small scale.

– Triple book format with rules and history split up ~Editor, this sounds like the current 40K format
– Round bases
– June 20th
– 6 Factions
– Game picks up after the End Times series, taking it into account.


Round Bases have been spotted-
here is the link if you need to go see it yourself.
http://boards.4chan.org/tg/thread/40086150/got-my-grey-seer-in-my-order-do-you-think-this-is


via posters on 4chan showing round bases in their recent orders they have received.
Got my grey seer in my order

Hey, just got my guttrot spume model today, a round 40mm came in the pack. Judging by recent photos and leaks i might as well put him on the supplied round base in preparation for 9th ed.