Skitarii in Pratice: How good are they?

Hey everyone, Reecius here to talk about Sktiarii! Be sure to check out the Tactics Corner for more great articles.


Skitarii have flown under the radar a bit, lately, due to the huge splash that Eldar made. Also, it has taken a little bit of time for everyone to catch up on them as no one had Skitarii models lying around to play with as they are brand new! Over at Frontline Gaming, we hustled to assemble a Skitarii army and have been getting in some games with them. This is not a full blown review, which you can read here if interested, but an overview of how they play, their strengths and weaknesses.

Skitarii appeared at first to be pretty underwhelming on paper but we had a feeling this was one of those “you have to play it to know,” type of scenarios. And that hunch was right. Skitarii are actually REALLY good. All of the units in my experience, baring Rangers, have been outstanding. The thing that really jumps out at you is the synergy of the army. The units work together really well. A lot of folks have focused on Vanguard as the all-star unit (who are fantastic, no doubt), or Dunecrawlers (which I wrote a review of, here) and have dismissed some of the other units such as the Dragoons, Infiltrators and Ruststalkers. After trying them all out, I have to say I disagree. 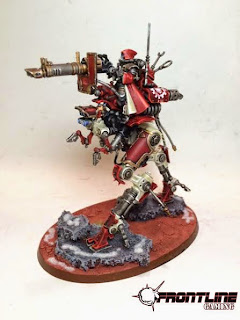 Dragoons have been surprisingly good! They are crazy fast, actually fairly resilient with their 5+ cover save, and if you have some hot dice: my goodness! The other Tuesday on one of our twice a week live 40k games (which you can watch on our Twitch Channel, if interested), I charged 3 into a unit of Nurgle Spawn with 2 psychicly buffed Sorcerers and the Dragoons obliterated the unit, it was crazy. They have exploding 6’s to hit, like Necron Tesla weapons, which result in not 1 but 3 hits for each 6. I ended up doing 18 strength 8 hits at I6. Needless to say, the unit evaporated. Now, this isn’t always the case, of course, the first outing with them I charged them into a grounded Flyrant and whiffed, didn’t do a single wound. Doh! But, in our games so far, the Dragoons have been a really fun unit that I wouldn’t have normally considered using. They’ve been outstanding for flying up the field and attacking units they are good at fighting, such as vehicles, Knights, non-dedicated assault units and for killing high toughness models such as monstrous creatures, so long as they can swing first. Plus, they’re cheap as chips for a unit of 3. 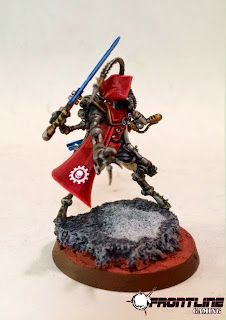 Infiltrators and Ruststalkers also get a bad rap on ye ole interwebs, but I think it is unfounded. When you actually play the units and not just theoryhammer them, they are quite good. Both units are super fast! That speed is something that is hard to quantify without playing. It makes them threats to huge chunks of the board. Ruststalkers are pricey and can be fragile, but if you send them into the right targets, they shred things in melee. So long as the target isn’t strength 6, they are actually pretty resilient with 4+/6++/FnP and 2 wounds. I have had them wade into units of infantry and just plow through them, not taking much damage in return. 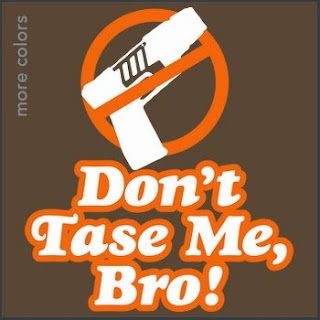 Infiltrators also, have been really good. I thought they would under-perform based on their stats but I was so wrong. In all of our test games so far, they’ve been better than the Ruststalkers. I run them with the Taser Goads and the Uzis (my name of them, lol) and their ability to Infiltrate+Scout in the Maniple Detachment, their debuff (6”, -1 to WS, BS, I, LD) and high volume of high strength attacks has proven this to be a surprisingly good unit. Apart from the first time I used them where I just threw them away, they’ve walked through multiple light units and force multiplied the rest of my army by reducing the efficacy of key enemy units. I really dig them and wouldn’t play Skitarii without them, now. 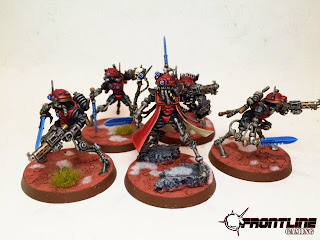 Both Infiltrators and Ruststalkers though, must be very weary of morale (as with all Skitarii). They can get run down easily if they lose a combat, and as such, if you field them, ALWAYS take the Omniscient Mask on whichever unit you value more. It gives them Zealot which not only improves their offense, but—more importantly—makes them Fearless.

The real key with Skitarii, IME, is to play the units in harmony with one another. Don’t send Ruststalkers, Infiltrators or Dragoons into things they can’t handle, you’ll just be disappointed. Have your Vanguard and Dunecrawlers focus on killing the really nasty stuff, let the other units sweep up the chaff. If you can pull this off, you will have a lot of success with your army. If not, it will crumble, quickly. I have lost 1/3 of my Skitarii army in assault when my opponents have been able to catch a few units into one melee and they subsequently get run down, on multiple occasions. You have to be able to mitigate this when playing Skitarii which can be hard to do as most of your heavy hitters want to get really close to the enemy. 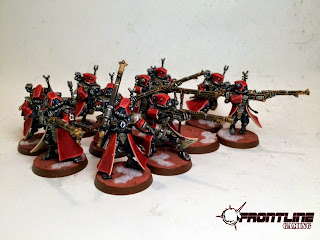 The other key point to focus on is movement. Skitarii all get some cool abilities in their Maniple such as Scout and Crusader to help with their slower speed. But, if your opponent counter-deploys you well, you can find yourself way out of position. Consider allying in some transports such as Drop Pods, Rhinos, Taurox, etc. Skitarii greatly benefit from these. Also, Coteaz is a major benefit to Skitarii as they really want to go first in order to Alpha strike. Getting seized on if they are all exposed can be game ending. Coteaz makes this 6 times less likely to occur in addition to all of the other benefits he provides. 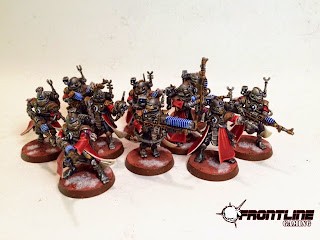 Despite not having a ton of units in their army, Sktiarii are really fun to play and pack a wallop. They are balanced by having a lack of mobility on some of their key units and suffering from morale vulnerabilities. But, this can all be mitigated through smart play and the application of some allies. Played well, Skitarii can hang with any other book out there.