This was the rematch from the last Grey Knight sweep, so the lists are the same. However this time, the Night Lords hit their mark, played extremely well, and concentrated on the limitations of the Grey Knights. I wont give away who won the battle, but lets just say it was the closest fight I have had in a long time.

Video wise, I am trying quite a few new things in this one in an attempt to find my niche in video battle reports. So any comments both positive or constructive are welcome. Once again, this video is already posted to the page on the site with videos.

The lists......
On my side was an updated Grey Knights list, with 3 full squads of purifiers, couple strike squads, 2 purgation squads, a Grand Master and Librarian. Loads of psycannons in this one.

On the Night Lords side of things, it was the same version as last video, with a heavy heavy dose of plasma. Chaos Terminators with combi-plasmas, two lash sorcerors (one in terminator armour), 2 full 10 man chaos marine squads w/missile launchers, a couple with meltas and combi meltas in rhinos, 2 chosen squads loaded with plasma, and 3 units of havocs (1 with autocannons, 2 fully loaded with plasma). 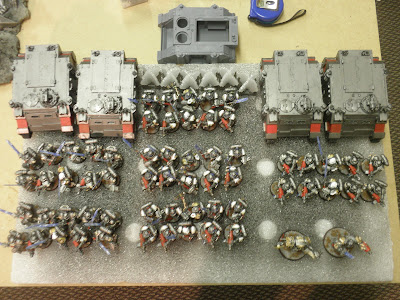 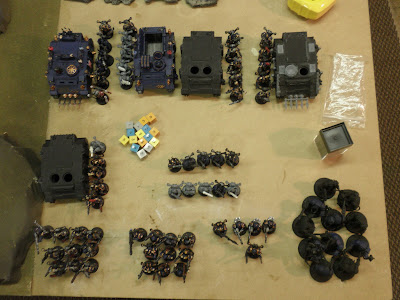 Some of the crazy things that happened.....
It took me 4 rounds of trying to move through difficult terrain to get into the ruins. The moment I did, I was lashed 10" backwards and had to start over. Luckily I was able to finally enter the ruins and make the game close.

Konrad Curze (my opponent) was very adept this game at only entering my 24" range when he chose to. He used this to his advantage, several rounds making sure that he was within 24" of my unit, but 24" out of my psychic hood range. With this happening, his chaos sorcerors dominated a lot of game play. I just was not able to beat the dice to keep myself in hood range. When I did, he simply moved back and forth to wreck havoc on me.

My purgation squads were once again my all-stars on the Grey Knight side of things. I ended up taking 3 perils of the warp within the first 3 rounds of play. Throughout the game, it went up to 5 perils. The warp just would not bend to the will of the Grey Knights, and even when it did, it killed or wounded  several Grey Knight psykers.

It was a great game. The type that I enjoy the most. Hard hitting lists fighting out a tough battle.
5/17/2012
Natfka
Battle Reports