Do Not Panic: 6th Edition Rules 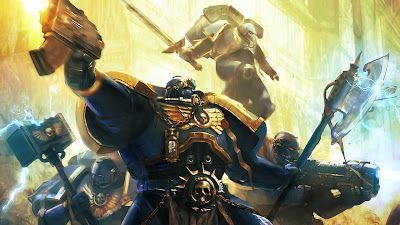 It was time to do some thoughts on some of these 6th edition rules that have people freaking out. I want to deal with my thoughts on several of these rules, because at their heart, we do not have the full rules sitting in front of us, and some logic or caution is needed to get through them.

Now these are not new rumors, but instead a look at how the new rumors could shape up. Remember please that we do not know any of these rules in their entirety. Instead we (myself included at times) have been in a general panic because we see these rules through the eyes of 5th edition.


•Psychic powers are selected during deployment. (except Grey Knights)
We have heard over and over about random psychic powers. My first thought like the rest of you, was OMG.... F me. OK, I'm never taking a psyker again. Then I drank some coffee and settled down somewhat, and then freaked out some more. Finally though I thought about it, read some more, and realized with some confidence, that we are only seeing part of the rules.

-Each Discipline will have a "Default" power and a set of others that you will roll for each game.

So what we are looking at is you get to choose your primary discipline, probably some choices from your codex that you pay for in points, and then you get some other options that will be randomly chosen from your discipline. That is how I see it coming to pass. The way I see this rule coming is that psykers will have more powers available. The minor ones in your discipline will just be additional and random powers for your psykers.


•Random Charge Lengths are in
Ok, this one has assault armies all cramped up. Once again we are going off of assumed this is the rule in its entirety. I have heard that difficult terrain no longer slows you down. No rolling to see how far you can go. Add to this that I think you will have a minimum assault range+ a random additional dice to that distance, and you have assault armies looking nasty again.

Since I do not play fantasy (lets not go down that road in the comments please), I have heard that fantasy has a larger than 6" assault. Meaning that even dwarves can get a larger assault range.

So what if, GW has decided to increase the assault range of the game, with a random modifier added to it. So possibly your assault range is a full movement+ d6. That would mean that perhaps and this is the most logical part in my book... That during any phase you have the change to move your full movement.


•Vehicles use "hull points" in 6th.
Here is another one that we do not know everything on. Are hull points for a single turn? A single unit or phase? Or are they game wide? Personally on this one I do not care either way, since its often that a vehicle will suffer so many results during a game that it shuts the mechanics down currently. Ever have that light armoured transport shot at by 2500pts of heavy armour and have it survive? I think there is a nice balancing factor here.... and this comes from someone that loves using vehicles, and will continue to do so.

We just do not have the details on this one. I like the idea of Hull Points, and look forward to see how this one plays out.


•Wounds are allocated to the closest models first
This would take longer.... Really? If that is the case, some of these argumentative players need to be removed. If its close to a valuable model, just 4+ it. 90% of the time, you wont even need to measure this one.

Once again we really do not know all the rules that surround this one either. I can very easily see how independent characters would be not included in this, or even sergeants. The rules really did not specify all the rules that surround this. If this was the case, Sergeants or Characters would once again be leading in the front of the units, as their positioning now seems like its becoming more important.

I love the idea of the cinematic wave of bullets hitting the first couple ranks of models, and the sergeant or the independent character charging through it for the upcoming slaughter.

I also see the tactical decisions that must be made when moving your models now. Do I put the melta gunner up front to take his single shot outside of double tap range? Or do I hold him back some? Assualt Terminators with Storm shields put up front, while lightning claw terminators following close behind.

The only issue I see with this one, is sniping with a lascannon seems plausible now. That melta gunner stepped too far this direction and my lascannon can now snipe him. However we do not have the entire rule set in front of us, so we have no idea what it will bring.


The point of it all
We are getting glimpses of what the new rules are going to look like. Just like any codex that has come out, we tend to panic or declare something dead and gone, or over powered without knowing all the details.

Since we do not know the complete rules regarding these issues, or even how they are written, its a little too early to give up, quit, or even get mildly panicked about what is on the horizon. I am looking forward to the changes ahead, and see them as a positive step moving our hobby and game into a better light.

Please please remember that these are not additional rumors. These are merely speculations on rules that would complete the little bits that we have heard. These are not probably how the rules will turn out, but I expect something similiar or at least something to make these rules more complete.