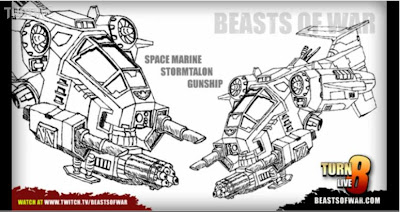 The Beasts of War live event is over, and there are new pics and rules for us to take a look at. I wrote a bunch of stuff, down, so I may be off on some bits or missed something, but this is how I heard it.

General information
Flyers will be released on June 2nd. The release will contain a Space Marine flyer, the Stormtalon Gunship, three Ork flyers, and the Necron dual kit for the Nightscythe and Doomscythe.

Other things mentioned was 6th edition being released July 7th with a starter box set in September.

Note all the sketches provided were done by Beasts of War from what they saw the models looked like. 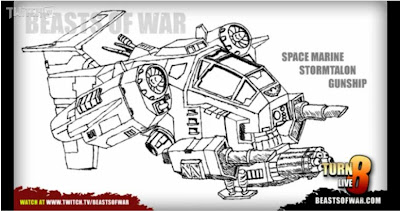 Escort Craft
Can be attached to a unit of deep strikers, and will appear within 6" of the deepstriking unit

Notes: The model was painted blue with ultramarine symbols, so we know at least vanilla marines will get this vehicle. Others are unknown. I would imagine codices without a storm raven for sure would get it. Model wise, it was shorter than a storm raven and appears much narrower. 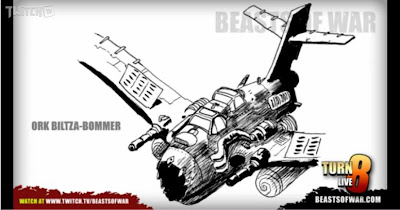 Three ork flyers were mentioned. Its not sure whether they are all part of a single kit or two, one for the dakkajet and another for the bommers.

Twin linked Dakka Guns
Strafing Run- BS 3 against anything but jump infantry and skimmers.
Waagh Ability: During the round of a Waagh, all guns may fire twice.

Upgrade Fighter Ace which gives the Dakkajet BS3 against everything


Waagh ability: During the round of a Waagh, all guns may fire twice. 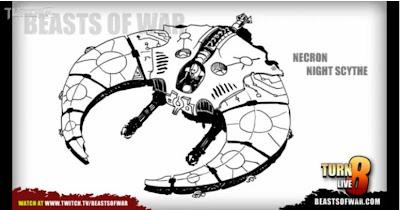 Necron Flyers are also said to be coming out as well, here is the sketch on it. Beasts of War claimed they both were very true to the concept sketches.