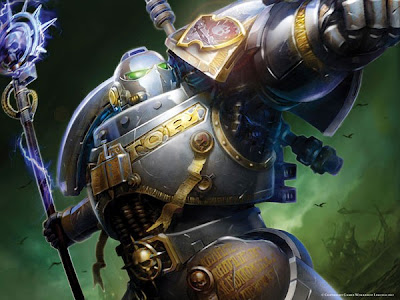 Psychic Powers in 6th edition have turned up over on Bols. It will be a shocker at face value on what this rumor is saying. However there are still so many unknowns that it is hard to say how this will play out. So read on and don't forget the comment section below, as its sure to get heated.

Please remember that these are rumors and should be taken with a grain of salt.

via Bigred over on Bols
First up, we have the previous rumors talking about "Lore Equivalents" and the general pattern forming of a lot of WFB 8th concepts making their way into the game. Here's the latest from the Bothans:

-There will be at least 4+ "Disciplines" of Psychic Powers in the game. (WFB has 8 lores)
-Disciplines seem to fall roughly along the lines of the sects described in the novel "A Thousand Sons" as used by the Heresy-Era chapter.
-Each Discipline will have a "Default" power and a set of others that you will roll for each game.
-Number of rolls you get and the the exact details of which powers you end up with are said to be similar to WFB 8th's power selection mechanic.
-Powers have a "Casting Cost" that is different from the mechanic used in WFB 8th.
-Certain 6th Codices will add additional racial specific Disciplines.
5/09/2012
Natfka
Rumors