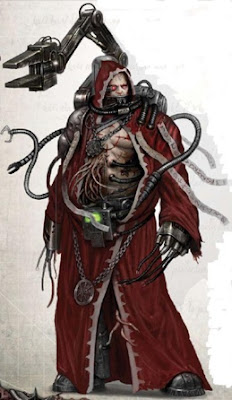 This morning we have a little rumor coming around. It isnt much, and although its from a new player in the rumor game, I thought I would share. There are some very cool possibilities if something like this character are true.

What he may be referring to is some sort of Dark Mechanicus Techmarine, or a Heretek. According to Lexicanum 40k a heretek is the following.

A Heretek is a member of the Adeptus Mechanicus who has strayed from its strictures and dictates, and betrayed the Cult Mechanicus by, for instance, weakening the Adeptus' stranglehold on the knowledge of the Imperium's technology, or embracing individual experimentation and innovation.

Perhaps and just perhaps, something like this exists in the codex, either by fluff or as an option to play. Could these be the creators of our new infernal Daemon Engines?.... the new dreadnought (althought not called that) and the Dragon. It would also make sense for characters like this to be there to service other daemon engines, or a possessed vehicle upgrade.

Im not going to quite classify this one as out of left field, however give it a good dose of salt.
Here is the rumor.

via MrSteelfist
Only a little rumour i picked up at Warhammer World but i've heard mention that there will be a Techmarine type character, not sure if this is a SC or just a HQ choice though.

I just recalled being told that there would be a smaller demon engine that operated in a "pack" but isn't Brazen Knights. This may bestudio people just throwing some falsehoods out there to mess with us but thought it worth mentioning.
5/18/2012
Natfka
40k , Chaos Space Marines , Rumors , Warhammer 40k