Ulthwe Strikeforce Supplement for Eldar on the Horizon. 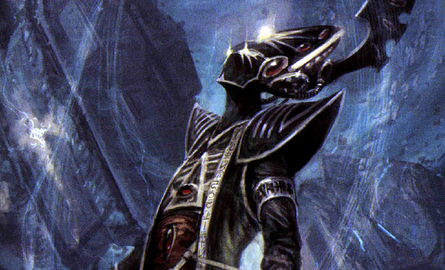 The latest rumblings for Eldar are not for their psychic power lacking kin, the Dark Eldar, but instead for the talented Ulthwe in the form of a new supplement.

via an anonymous source on Faeit 212 ***
An Ulthwé Strikeforce supplement for Codex Eldar is on the horizon with new plastic Warlocks. GW realizes that Eldar players can and do field many Warlocks as part of the HQ Council, so they are giving this the dedicated plastic multi-part infantry kit treatment rather than offering only one or two single plastic character clam-pack models (which would put a limit on posing options, etc.)

As you know the current Warlock models are very dated, a few of them being Jes Goodwin's "evergreen" sculpts which have stood the test of time since the early 90's. Jes has wanted these classic models to be redone for a long time. The Ulthwé supplement will be the perfect opportunity to release the new kit (which of course will be usable by all Eldar warhosts, not just Ulthwé).

The supplement itself is largely based on Phil Kelly's brilliant Ulthwé Strike Force army list from Codex: Eye of Terror way back in 3rd edition. We can expect the usual background section which will greatly expand on what we know about Ulthwé along with Warlord Traits, wargear, Cities of Death / Stronghold Assault strategems, etc.
9/05/2014
Natfka
40k, 7th Edition, Eldar, News Headlines, Rumors, Warhammer 40k