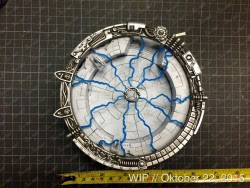 The Tau Tidewall Rampart looks fantastic, and being the first Xenos Terrain kit it has me pretty excited to see what else GW has in store for us. I have not yet gotten to see one in person, and this has me a little wary of it, especially with a moving piece of terrain. However, my first impressions are good, as GW is trying to push their boundries.

Gametrust has just done a review of the new release, and I think it's definitely worth checking out.


The review is in German, however, Google translate although rough gives us a decent idea of the article. Also there are lots of pictures taken while they were putting it together.

via Gametrust
We just put up a review for the Tidewall Rampart. There are many more
pictures in it, which show the size of the different parts and which
models fit onto them:

Unfortunately the Tidewall seems to be too big to be useful in a battle.
Especially since you can't fit that many models on it. We gave it 47 out
of 100 points and are pretty disappointed by it.