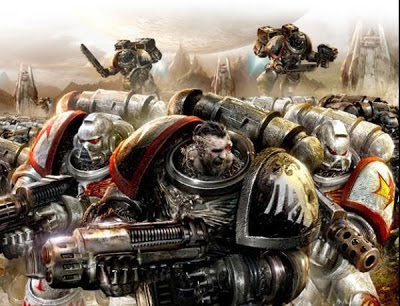 A lot of information has been flowing today, and you can find both the White Scars and Raven Guard information out of the Kauyon Campaign book just about in every corner of the internet today. Here are a couple locations that you can get all the information for both the Space Marine chapters that are focused on in the first book of the Damocles War Zone.

The Relics of Chogoris are revered artefacts and trophies of war borne into battle by the most skilled hunters of the White Scars. Each is a powerful symbol to the warriors of that Chapter, and a treasure that has survived through uncounted battles. Only one of each of the following items may be chosen per army.

As a First Founding Chapter, the White Scars can trace their history back to the birth of the Imperium. The oldest relics of the Chapter date back to that ancient time, and the Banner of the Eagle is one such artefact. It is incredibly rare for this venerable standard to be brought forth into the crucible of war, though any wily commander knows the inspirational effect that such a sacred banner can have on those that fight in its fluttering shadow. At the crown of the banner sits the glorious adamantium eagle – the symbol of the White Scars’ bloody victory on Golgotha, from which the Banner of the Eagle takes its name.

May only be taken by a model that may take items from the Space Marine Standards list. Friendly White Scars units within 12″ of a model with the Banner of the Eagle have the Fleet and Furious Charge special rules.

The White Scars discovered this ancient relic during their conquest of the Bale-star Cluster, far beyond the Eastern Fringe. The Glaive of Vengeance was the very weapon once wielded by the great Kyublai Khan, before the Chapter Master was murdered by the Dark Eldar of the Bloodied Talon. A crackling energy field surrounds the fearsome curved blade that extends from the weapon’s adamantium haft, enabling it to cut through any armour. Some among the White Scars claim that the spirit of Kyublai Khan still clings to the glaive, and that his endless thirst for revenge upon his killers is what makes this weapon seem to lunge at the foe with a will of its own.

* The Glaive of Vengeance has two profiles for both Strength and AP. The first is used only on a turn in which the bearer charged; the second is used at all other times.

The tribes of Chogoris are famed throughout the Imperium for the consummate skill of their horse archers. It is written in the Scrolls of the Plains that the Hunter’s Eye – an ingeniously constructed bionic eye of great age and unrivalled quality – was created in honour of this aspect of the White Scars’ heritage. This device picks out augur-assessed weak spots in the quarry’s defences, enabling its wearer to strike with uncanny accuracy, or to relay this information via dataghost to any other friendly forces engaging the target.

Mantle of the Stormseer 20 points

The ancient psychic hood known as the Mantle of the Stormseer crackles with barely contained elemental energies. None know who crafted this relic, but it is gifted to whichever Librarian demonstrates the greatest skill at communing with the spirits of the storm. Said to channel these entities, the mantle not only wreathes its wearer in a shroud of counter-psychic force, but allows him to wield the wrath of the storm itself. At such times the Stormseer’s eyes glow with a harsh light, and corposant crawls across his armour as the enemy are plucked from the ground and hurled to their deaths by howling psychic gales.

Librarian only. A model equipped with the Mantle of the Stormseer has the Adamantium Will special rule and knows the Psychic Maelstrom power from the Telekinesis discipline in addition to any others he knows. This is not considered when determining if he has Psychic Focus.

Scimitar of the Great Khan 25 points

One of the favoured weapons of the tribes of Chogoris is the scimitar – a light, curved blade well-suited to their mounted style of warfare. It is little surprise that the armouries of the White Scars contain many power swords forged in the style of traditional Chogorian scimitars. Of these finely wrought weapons, the most singular and storied weapon is the masterwork blade known as the Scimitar of the Great Khan. Intricate filigree runs along the length of its blade, depicting many of the White Scars’ greatest victories. Chapter lore holds that this weapon was blessed by the Great Khan himself during the purging of Daikeos. Soon after, his champion Ghorotei struck the head from the Ironwyrm King in single combat.

Warblessed: When a model carrying this weapon fights in a challenge, add 3 to its Weapon Skill.

Wrath of the Heavens 25 points

The Space Marine bike known as Wrath of the Heavens was constructed to possess the speed of the storm itself, upon the orders of the former Master of the Hunt, Khantak Khan. Fitted with diatremite cylinder arrays and a short-burn grav impeller, Wrath of the Heavens can not only put on a turn of speed that would shame a Land Speeder, but can also perform jaw-dropping gravitic hops over the battlefield. Thus, a skilled rider can vault wrecked tanks and ferrocrete barricades at will, and even hurtle over the heads of the foe to strike them from behind.

Wrath of the Heavens is a Space Marine bike, and cannot be taken by models equipped with Terminator Armour or a jump pack. When a model riding Wrath of the Heavens Turbo-boosts, it can move up to 18″ and pass over units and terrain as though it were a Jetbike.
10/26/2015
Natfka
40k, 7th Edition, Leaked Images, New Releases, News Headlines, Space Marines, Tau