Some Details from White Dwarf 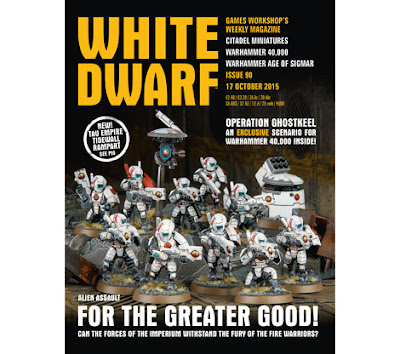 Some details are here from the White Dwarf, and ShadowWolf has been been gracious enough to go over them for us. The biggest in my book is that the campaign supplement books are spit up. One for the Shadow Force Solaq, and one for the Infiltration Cadre Burning Dawn. Hopefully they contain the same information in them, so that 40k Lore enthusiasts, (yes there are lots) dont have to purchase both just to get the lore they crave.


Also of interest is the Mor Deythan Ravenguard models. Lots of cool new pre-orders this week with the new models and terrain for Tau.

via ShadowWolf32387 on Faeit 212
A lot of what I've got this week is stuff that's already been seen, but I do have some new bits for you.  The biggest news may actually be Forge World related though.  Looks like the Mor Deythan are imminent.  Maybe even tomorrow!


Highlights:
New Fire Warriors box indeed only makes 10 of them.
Max size of Breachers unit is 10, they are minimum 5 though.
There are TWO campaign supplement books, one found only in the SM set (Shadow Force Solaq), and the other found only in the Tau set (Infiltration Cadre Burning Dawn).
Tidewall Rampart does effectively incorporate an ADL type setup and has a translucent blue plastic for the energy fields.
Mor Deythan officially shown off by GW/FW now through White Dwarf, implies release for this week, maybe Saturday.
Hints for next week indicate the new Crisis Suits and a reference to the Patient Hunter philosophy they have.
No hint for Paint Splatter

Here is what What's New Today says about the new magazine and its contents
Here’s what else you'll find in issue 90:

•A detailed look at the Fire Warrior Breachers.
•Pulse blaster, pulse rifle, pulse carbine? Oh, the choices!
•Retribution from the shadows.
•A wall like no other.
•We show you how to paint the new Fire Warrior Breacher Team in Paint Splatter.
•And provide all their rules so you can use them in a game.
•A Parade Ground of Stormcast Eternals painted by our very own Duncan Rhodes, Lord-Celestant of painting videos.
•Operation Ghostkeel, an exclusive scenario for Warhammer 40,000. Are you stealthy enough to complete the mission? There's only one way to find out…
•John Beech talks about his Golden Demon entry, a floating Eldar Grav-tank. And yes, it really does float.
•We travel to the planet of Baal to take a closer look at Joe Naber's Armies on Parade entry, the Tower of Amareo.
•And plenty more besides, including a look at pulse weaponry, floating scenery, Hover Drones, a stinking ball of warpstone and a question about why Khorne hasn't won yet…
10/16/2015
Natfka