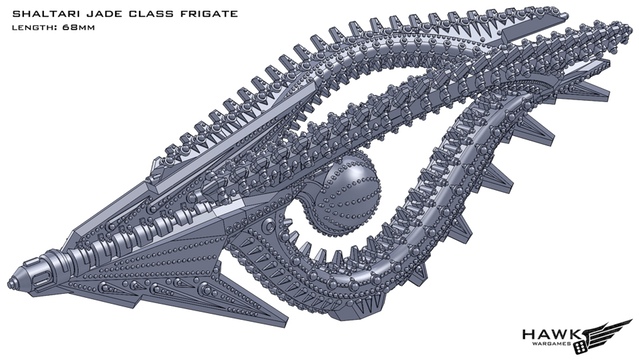 Already this kickstarter has surpassed what the Hawk Wargames team envisioned. They were cautious and hopeful, and I think they are completely surprised by the amount of support this project has. There are two updates, the first included more Admiral level pledges..... and Im sorry but I know who was able to snag the very last one. Beyond that, the Shaltari are being unlocked and there is much more coming with more announcements tomorrow!!! .... pls be phr pics!!!!!

We didn't expect such a fantastic start as we have had, and we are very surprised that we have reached the limit on the Admiral Pledge already. We have been asked by a number of people if we can increase the quantity. We originally set the level to allow us to manage a few of these days, however, there has been so much interest, that we have decided to add another 50 availability to the Admiral Pledge. This will be being updated in the next few minutes.

Because of you we can now bring Dropfleet Commander to life in plastic, keeping the RRP down for everyone, while still being able to produce high quality models. We have smashed through our first planned Stretch goal, and therefore we are now adding the below, to the available bolt-ons:

These faction pins will be available for all 5 races and cost £5 for each one if you wish to add it to your pledge.

Stretch goals allow us to offer backers even more rewards for their pledges, as well as more bolt-on extras. We will be adding an unlock map to the Campaign in the next 45 minutes.

As we unlock goals, the next few unlocks will become visible so that backers know what will be unlocked if we hit the next target, and so on. The first few stretch goals will include:

This includes 3 double-sided high stock paper mats, including a Snow/Ice world, a Desert world, and An active Lava flow world. If we hit the £100k Stretch Goal, this will unlock as a Bolt-On.

These are Faction specific dice for each of our five factions.
You can add as many sets of these as you’d like, and then decide which exact sets you want to go for via the backer pledge manager at the end of the campaign. These will unlock as Bolt-Ons if we hit the £110k Stretch Goal.

This is the starter fleet for Shaltari in plastic. Images for these will be available very soon. This will unlock at £130k. But in the mean time, here is a render of a Frigate, just so there is an idea of what is coming:


Project Update #2: Dropfleet Commander by Hawk Wargames - It's happening very fast!
Firstly, we want to say a huge thank you for all of your support. We are very proud of Dropfleet commander as a product and we always had high hopes of exceeding our pledge target, but none of us expected the explosive level of pledging that we have experienced.

Planning out the stretch goals for a Kickstarter involves a certain amount of educated guess work and flexibility. Although we have planned a series of stretch goals, including the unlocking of both Shaltari and PHR factions, we had expected the unlock process to much more gradual. This was to ensure that we didn’t promise too much and be unable to deliver, or indeed over-promise and then be unable to hit our original goal because of huge amounts of extras to delivered. As a result it will take a little more time to calibrate full range of stretch goals in order to ensure the we don’t exhaust them too soon and also to make sure that the rewards reflect the level of support that the community has shown.

We have mapped out the stretch goals up to the £150K mark and will be reviewing the next series of unlocks tomorrow (The PHR will be among them, and give the levels of support we’ve had so far, almost certain to be unlocked). Hawk Wargames are a small but dedicated team, and we appreciate your patience as we adjust to meet the demand. You can rest assured that there are plenty of goodies to come and all of our backers will be generously rewarded for their support.