Something New: The Old Tau Codex is Not Being Replaced 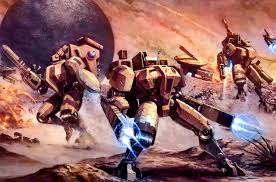 Old Codices not being replaced? Its being said that the new Tau Codex that is coming out is not required to play Tau. Instead it seems that this week's White Dwarf states that the old rules are not updated, and that you can just pick up the new War Zone Damocles with the new units it.

Of course they are releasing a new codex that has all of them in one place, but it is not required to do so. A new trend? This could be very bad if so for some armies. I just am not sure what to make of this.


In the long run, if codices are all brought up or down to the approx same level, I can see this as a solid venture, and a good way to bring new units into the fold. After all no need to re-invent the wheel if its not broken. However, some dexes currently are trying to drive on square wheels.

While the leaks are in German, this is being translated saying very much the same thing by several people.